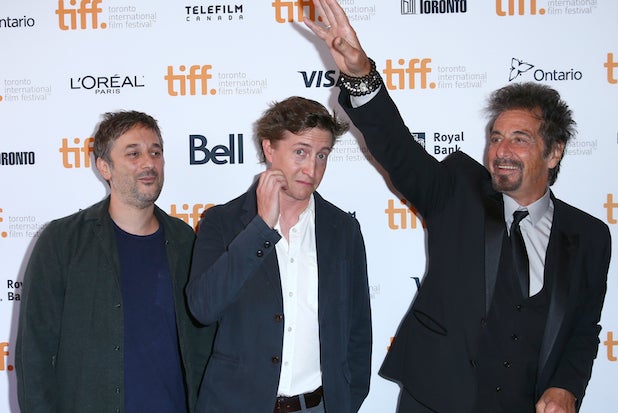 David Gordon Green hustled to the phone, and in the sticky heat of his New Orleans production office, that was enough to cause a bit of a sweat, even on a filmmaker based in Texas.

Not that he minded much; with a successful movie featuring an Oscar-winning star touring film festivals this fall, and just three weeks from production on his next project, the prolific filmmaker was all smiles.

“I get really happy when I’m rolling, when everyone is quiet and let’s me do my thing, it’s the only time I get respect in the world,” he says, laughing. “Pre-production is nothing but talk and decisions. It’s like a sculptor talking without any clay, the sculptor doesn’t get to work until he has his hands dirty. I like when I’m the only one allowed to talk.  I like the ceremonial respect of it.”

Gordon Green has been getting a lot of respect as of late, too, as he’s been directing both TV (the hilarious Amazon pilot “Red Oaks”) and the film festival favorite “Manglehorn,” which stars Al Pacino as a downbeat and slightly delusional Texas locksmith.

It is a major departure for Pacino, a genius actor who has starred in some of the last half-century’s greatest films, but, more recently, has come to be known more for his yell than any subtlety. “Manglehorn” is a character piece through and through, a poetic and sympathetic look at a man so filled with regret over the past that he can’t let new love in.

Holly Hunter co-stars as a potential love interest, a bank teller with a sweet heart who will listen to Pacino’s title character tell stories about his sick cat every Friday when he visits to make a deposit. Chris Messina plays Pacino’s estranged son, while Harmony Korine — yes, Harmony Korine — cameos as a massage parlor owner.

Fans of Gordon Green’s work might recognize some of his earliest films, like “George Washington,” in “Manglehorn,” and he acknowledges that part of the appeal was getting back to basics.

“With the perspective you get in making movies, you also get cynicism, you start thinking I wouldn’t do that cause it’s too difficult, or it’s too pretentious, or because it doesn’t follow a traditional structure or technical process,” he said. “And you almost have to work at being naive in a way, you have to strip away logistics and process that gets ingrained into you because it’s part of being a ‘professional.'”

TheWrap spoke with Gordon Green further about “Manglehorn,” film festival culture, and his next film, “Our Brand is Crisis,” which will star Sandra Bullock.

TheWrap: So how does one approach directed Al Pacino in a role that seems so polar opposite of the ones he’s done over the last 15 to 20 years?

David Gordon Green: You go to his house and eat strawberries and hang with his friends and read the script together and come up with ideas. I bring my family of filmmakers to the creative table, you go out to dinner, write letters, improv, listen to some music. It takes seven months of development, and no notes were anything but literary. They were like, let’s break all the rules and follow our guts through the creative process, because we can, since we’re doing it at such a low budget.

He brings so much to the character. [Screenwriter] Paul Logan came up with some great stuff, me and Al just came up with the role. We’d be filming, and he’d be mumbling and taking a tangent, and he’d say let’s pause and go to my trailer and write a love letter. No day was what it was designed to be, we’d go in with a game plan, he’s such a playful guy, it’s a matter of keeping in focus, his heartache and delusional romanticism.

I loved being able to take a guy who’s been a romantic lead in movies and watch him struggle to communicate with a woman, I was trying to channel my inner-Todd Solondz.

TheWrap: As a festival veteran, do you get tired of the process? It can be a grind, what are your tips for staying sane throughout it all?

A few things I don’t get caught up in: the dramas of credits, people say what about me, where’s my name gonna be? Financing movies and those frustrations of sketchy money and screwy financiers. I have great relationships with people who invest in my movies and have fun with all of them.

As for reviews and interviews and criticism, I’m definitely gonna do my best to get the word about my films out and take time out of my day to talk to people about it. I enjoy the conversation about movies, but I don’t let it affect what I do or how i see myself. I was thinking in Toronto, it would be really fun to watch “Prince Avalanche” again, because people will quote a line from it and that makes me happy. I go with the feel-good element of making a movie. A lot of time people will write negative reviews or cynical feedback, I try not to take any of it to heart.

TheWrap: Does that happen sometimes? Do people take it to heart?

Gordon Green: I’ve got a lot of friends who just stopped making movies, or only make them once every five years, because they are afraid, they’re just looking for perfection. I’m all about momentum.  With “Manglehorn,” we had the money for five weeks. Out of the 25 days we shot, there wasn’t one of them that I didn’t go to bed feeling great.

TheWrap: So it really is the love of production for you.

Gordon Green: You duke it out in the editing room and really try to chisel away, we could have gone a number of ways with this, we had a lot of options. Do you show the cat surgery or not?  I don’t have a meticulous storyboarded vision of what the movie will be. I met this veterinarian and I was like this guy should be in the movie, Dr. McCloud is awesome, he’s got a cool voice, he invited us in to watch the surgical procedure. In the script it may have been a sentence, instead we spent half the day talking about the procedure. To me that’s exciting.

We went in to get the terminology, to see what they’d do and say if a cat ate a key. He said, “I’m going to spay a cat and it’s the same area, then you’ll know what it looks like and how it feels.” So then we shot it.

TheWrap: Your next movie, “Our Brand Is Crisis,” is another big departure, a film about Rachel Boynton, about politics…

It’s hard to breathe up there. It’s an intense place, colorful culture. The costume design on this movie is trying to be accurate, how the people up there dress is just fantastic and gorgeous and full of color and character.

TheWrap: So how do you translate a documentary to fiction?

Gordon Green: We sat down with Rachel last week in New York, going through the outtakes of the doc. We’re taking a lot of creative liberties and licensing and fictionalizing things, to tell a specific story. I’d say we’re being inspired by it.