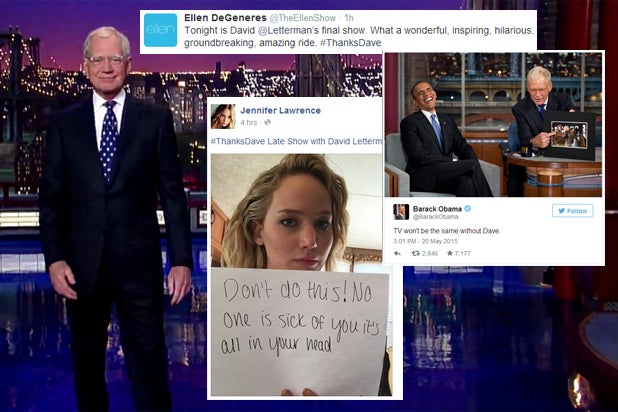 A trend does not happen in a star-studded vacuum, however — fans inundated Twitter with words of gratitude for his 22-year tenure on the “Late Show” and sorrow at his departure.

“I always turned to David Letterman when I needed something to make me smile, and I’ll miss him greatly,” BroLoch wrote.

Some of the social media tributes included:

It’s absolutely absurd to thank David Letterman for all he’s done in a tweet. But that’s the world we live in now. #ThanksDave

Congratulations to David Letterman, who I now believe is beginning his third career in show business. – Steve Martin (@SteveMartinToGo) May 20, 2015

Love how everyone is crowding the bars in Broad Ripple to watch Dave’s last episode! #IndianaBoy #ThanksDave #DavidLetterman — Betsy Schroder (@BetsySchroder35) May 21, 2015

I always turned to David Letterman when I needed something to make me smile, and I’ll miss him greatly. #ThanksDave — BroLoch (@BroLochGaming) May 21, 2015

Tonight is the end of an era. David Letterman & Rupert G’s deli were a staple of my youth… — Brandon (@WarriorotCross) May 21, 2015

Lawrence posted a final plea to Letterman on her Facebook page: