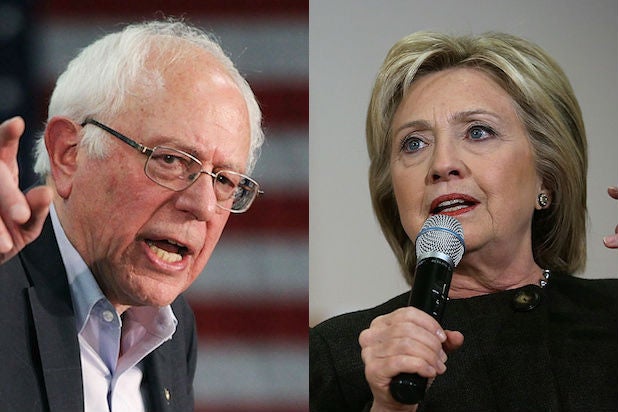 Just two days after splitting Iowa votes in two, both Hillary Clinton and Bernie Sanders looked for an outright win during CNN’s Town Hall in New Hampshire on Wednesday.

Anderson Cooper moderated the event with Sanders and Clinton offering their second-to-last argument before the New Hampshire’s first-in-the-nation primary.

The two candidates sparred over who’s the most progressive, big business and war.

But the real fun was on social media.

Here are some of the snarkiest, funniest and most relevant messages from Twitter as the event was going on.

6:02 p.m.: And, we’re off. Anderson Cooper stands among the crowd and introduces the program. Meanwhile some CNN staffers are boozing.

Tonight’s #CNNTownHall press file is in The Halligan Tavern, across the street from The Derry Opera House. #whiskeyforall

And some are traveling.

My whole row on this JetBlue flight is watching the #DemTownHall

6:05 p.m.: Not everyone is feeling tonight’s event

6:10 p.m.: Not everyone is getting their questions answered …

I sent all the presidential candidates ten questions to learn their positions on wildlife conservation issues. Crickets. #DemTownHall

This 74 year old jew reaches me and faith is a guiding principle in my life. He is a very spiritual man. #DemTownHall

I heart @BernieSanders – but then I always have, way before it was cool. #CNNTownHall

Iraq war was 12 years ago…. pick another reason to fight terrorism #DemTownHall

Bernie's got to diversify on Hillary's foreign policy–she voted for the Iraq war, but her experience is bigger than that. #DemTownHall

Video – Bernie Sanders: "Of course I'm a Democrat"… later adds, "some of my best friends are moderates." https://t.co/rVKFzPAWzz

.@BernieSanders: The U.S. should accept refugees from Syria and Afghanistan https://t.co/UGgxQZFDIz #DemTownHall https://t.co/0axXKnDI19

Bernie: “My spirituality is that we’re all in this together… when veterans sleep on the street, it impacts me.” pic.twitter.com/MzWIZuYdEi

There is no doubt @SenSanders was among those on Left who mused in 2011 about a challenge to @BarackObama. #DemTownHall

Bernie Sanders: “Anderson, I know you’ve been in journalism for a long time. I am Larry David."

"I AM Larry David," says @BernieSanders live on @CNN at #DemTownHall. @CNNPolitics

6:57 p.m.: So, Bernie reveals he’s hosting “SNL” this weekend before his closing statement.

"This land was made for you and me." Listening to Bernie's folk album. https://t.co/VWReuJc6yf #DemTownHall #tytlive

7:10 p.m.: A cute moment between Anderson and Clinton about making history.

Cooper: It'd be historic if you were elected. @HillaryClinton: "You think so?" https://t.co/63Df0PE7h8 #DemTownHall https://t.co/H0zC79iTHe

7:11 p.m.: Hmmm … Clinton is one talented person. She can answer town hall questions and tweet at the same time.

We have to protect the gains we've made on LGBT rights and women's rights—and do more to expand them. That's what's at stake. #DemTownHall

Wow. Great answer from @HillaryClinton about unfair criticism from the right: "Take it seriously but not personally" #DemTownHall

Vid: q to HRC: Once elected, “how are you going to defend yourself against right wing attacks?” #DemTownHall #TTT16 pic.twitter.com/UWfc0vZLvI

7:42 p.m.: Clinton is asked whether people should worry about her ties to Wall Street. Her Answer didn’t work for some.

Hillary must be dizzy from spinning so much. #DemTownHall

yo hillary your donations and contributions are public #DemTownHall pic.twitter.com/XEQFz4pp31

Hillary is ridiculous. She's literally going back and forth on her statements. #DemTownHall

#DemTownHall here comes the lies from #HillaryClinton about taking the money.

7:42 p.m.: Many viewers are putting a lot of effort into their posts.

So those @Snapchat filters work on people on tv #snapchat #DemTownHall pic.twitter.com/qiANio5pn7

7:50 p.m.: Hillary’s answer on legalizing marijuana was enough for some to #FeeltheBern.

Woman: can I have my weed medicine? Hillary: We should begin to do research. #DemTownHall #FeelTheBern

7:52 p.m.: Others wanted to educate Clinton on the benefits of pot:

There is no "right amount" of marijuana. You can't OD on it. That's why it's an amazing drug. #DemTownHall

Clinton, on how she can appeal to potential Sanders voters. https://t.co/Rnt5XhWHO2 #DemTownHall https://t.co/m0mh0BW1A3

7:58 p.m.: Not everyone is interested in the personal stuff it seems.

No one cares about your grandkids. What are your policies? How are you going to win over the youth? Ridiculous questions. #DemTownHall

This is some serious "evolution" we're witnessing from her tonight. Maybe she should run for POTUS of the Galapagos Islands.#DemTownHall

In case you were wondering (from Wikipedia): “The Galápagos Islands, a volcanic archipelago in the Pacific Ocean, is a province of Ecuador, lying about 1,000km off its coast, and considered one of the world’s foremost destinations for wildlife-viewing.”

If all debates were replaced with town halls I wouldn't be upset about it. #DemTownHall

#DemTownHall #Bernie2016 #HillaryClinton I love hearing them argue over who is the best lefty. The times they are achangin'!