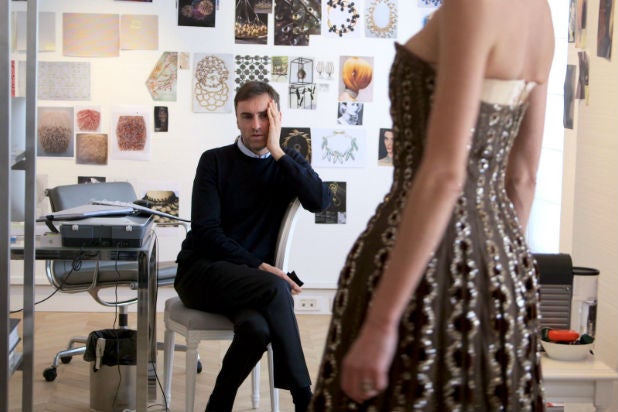 Documentary filmmaker Frederic Tcheng’s “Dior & I,” an inside look at Christian Dior’s first couture collection under John Galliano replacement Raf Simons, is a well-dressed economics lesson in both the show and business of contemporary fashion.

Fashion documentaries have made a significant impact at the box office and on streaming platforms in the past decade: “The September Issue’s” unrestricted look at Vogue grossed over $3 million on fewer than 150 screens nationwide. “Valentino: The Last Emperor” and its worshipful lens on designer Valentino Garavani was an early Netflix acquisition.

For Tcheng, anticipation over the film from the style and entertainment communities helped him relate to Simons — and his specific pressures to uphold the Dior brand while leaving his own signature.

“I suppose I was projecting onto him, knowing all this was coming,” Tcheng told TheWrap from New York. “But I sympathize with him [while promoting the film]. I’ve always sympathized with his mission to take control of Dior.”

Simons brought a skeletal creative team when he assumed the department’s top job in 2012, compared to the hundreds of revered garment makers and corporate staff at Dior, in operation since 1946.

Simons also inherited a shadowy empire in the wake of John Galliano’s termination in 2011 after a scandal over anti-Semitic remarks (Galliano’s right hand Bill Gaytten oversaw one collection prior to Simons’ hire). Known for his devout minimalism, many questioned blending Simons’ aesthetic with the famously whimsical, feminine silhouettes that stock the Dior archives.

“Dior is known for its romanticism, for its femininity, but really looking in the archive there’s a lot of restraint. I see an architectural connection between Raf and Dior,” Tcheng said. “Raf was trained as an industrial designer, and Dior wanted to be an architect. They’re sort of on the same wavelength.”

From Simons’ first meeting at the legendary Paris atelier to the last dress on the runway at his July 2012 inaugural show, the film is a window into the brand’s juggling act of ideals: pleasing deep-pocketed personal clients and managing worldwide visibility with movie-star-fronted ad campaigns.

A longstanding but expensive tradition, haute couture in the context of Dior is expertly-tailored and one-of-a-kind suits and gowns that can fetch upwards of $350,000 per customer in a given season, according to the film. A tense moment comes when a lead dressmaker, known as a premiere, flies to New York for a single fitting with a high-paying client amid constructing Simons’ first couture collection — which had editors, journalists and movie stars like Jennifer Lawrence and Marion Cotillard awaiting with bated breath.

Also Read: Zoe Saldana Weighs In on Dolce & Gabbana Boycott: 'Why Are We Still Talking About It?' (Video)

The cost of the running a couture business is increasingly exorbitant and impractical, Dior being a one of the last keepers of the honored French tradition.

“People have been saying that couture is dead as long as it’s been alive,” Tcheng said. “I don’t have a lot of insight into the business side, but you see it in the film. Raf seems to have found a place that’s closer to compromise.”

The documentarian sees himself much more as a filmmaker than a fashion insider, but did offer his thoughts on France’s recent institution of weight minimums for fashion models in an effort to combat eating disorders.

“It’s a complicated issue. It’s good that they’re doing something,” he said.

“There are two sides to the problem; you can change the law, but you have to also change perception of how we look at ourselves,” he said. At current, fashion groups stop just short of mandated laws, opting instead for education initiatives from groups like the Council of Fashion Designers of America.

“I noticed,” Tcheng said. “The word they used more was ‘modern.’ The criterion for anything was modern over historical. But I try not to use either. I try not to be a sycophant.”

“Dior & I” is currently in limited release nationwide. It’s poised to cross the $1 million mark by the end of May, the first to do so for independent distributor The Orchard.