Don Lemon refused to back down from remarks earlier this week in which he accused “white men” of being the biggest terrorist threat America faces.

In a Ben Shapiro-esque monologue on his CNN program Wednesday evening, Lemon dropped what he called “the cold hard facts” and urged those upset to look at the evidence without “emotion.”

“Tonight I want to talk about some uncomfortable truth, the truth about who really carries out domestic terror attacks in this country,” said Lemon. “Let’s put emotion aside and look at the cold hard facts. The evidence is overwhelming.”

“A recent report from the Government Accountability Office shows that even though more people died in attacks connected to Islamic extremists, the vast majority of deadly attacks in this country from 2001 to 2016 were carried out by far-right violent extremists,” he continued.

Lemon then ran a graphic which showed that deaths in America caused by “jihadists” significantly outnumbered “far right-wing extremists.” 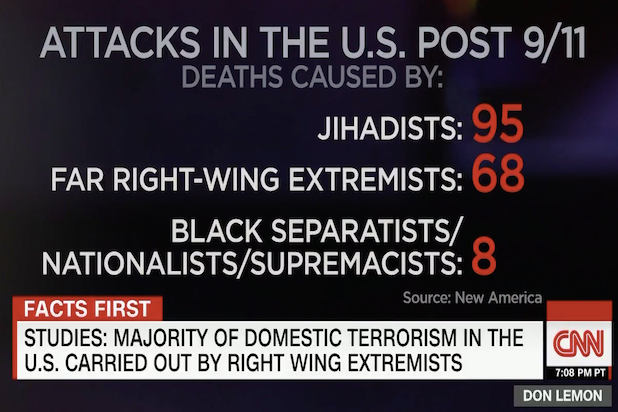 On Tuesday, during an appearance on “Cuomo Primetime” Lemon ignited a firestorm accusing “white men” of being responsible for terrorism mere moments after warning against the impulse to “demonize” individual groups.

“We have to stop demonizing people and realize the biggest terror threat in this country is white men, most of them radicalized to the right, and we have to start doing something about them,” he said. “There is no travel ban on them … they had the Muslim ban. There is no ‘white guy ban.’ So what do we do about that?”

It’s far from the first time Lemon has delved into divisive racial rhetoric. On Oct. 9, a panel on his CNN program ripped into Kanye West for his support of Donald Trump.

“He’s an attention whore, like the president. He’s all of a sudden now the model spokesperson. He’s the token negro of the Trump administration,” said CNN contributor Tara Setmeyer as Lemon laughed along.

“Kanye West is what happens when negroes don’t read,” former Congressman Bakari Sellers added. “And we have this now and now Donald Trump is going to use it and pervert and he’s going to have someone who can stand with him and take pictures.”

CNN repeatedly ignored multiple requests for comment about the issue at the time.