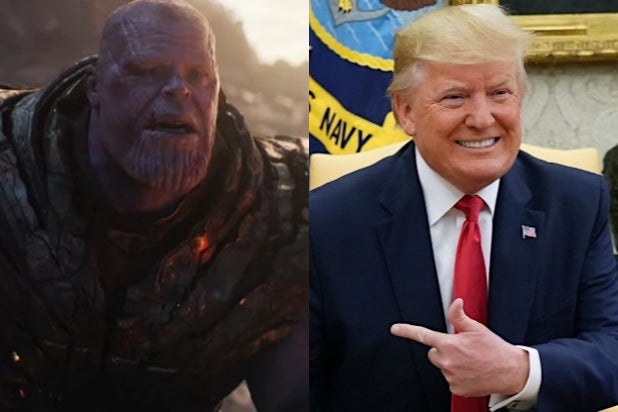 Donald Trump’s official campaign account tweeted a video on Tuesday of the President’s face superimposed on Thanos’ body in a scene from “Avengers: Endgame” right before the villain is finally defeated.

The video comes from the climax in “Endgame,” where Thanos utters the line, “I am inevitable” before snapping his fingers while wearing the all-powerful Infinity Gauntlet. It then cuts to a short clip of Nancy Pelosi and other Democrats disintegrating into a cloud of dust while discussing the president’s impeachment.

Of course — and this is a spoiler alert if you haven’t seen what is now the biggest blockbuster of all time — Thanos is the bad guy — and he loses. And the scene in question, from the climax of “Endgame,” comes just as Tony Stark has wrestled away the magical Infinity Stones from Thanos himself is snapped into oblivion. Does that make Pelosi Iron Man in this scenario?

On Tuesday, House Democrats formally announced two articles of impeachment against Trump, charging him with abuse of power and obstruction of justice.

See the video below before the media is “inevitably” flagged and taken down as well.

House Democrats can push their sham impeachment all they want.

This isn’t the first time the President’s face has been edited on top of a fictional character. Last month, Trump’s official account tweeted a photo of his head on Rocky Balboa’s body from “Rocky.” There was no caption on that photo.