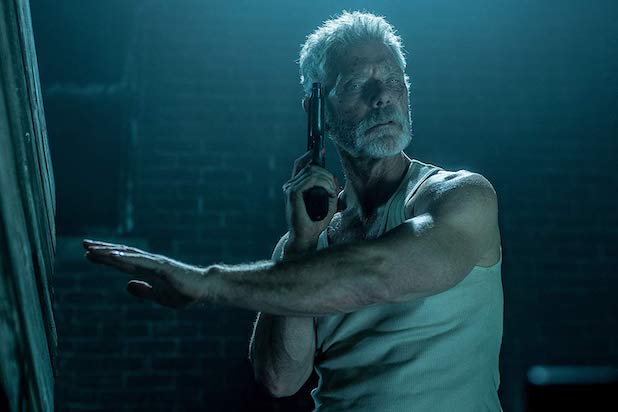 Rodo Sayagues, the co-writer of Fede Alvarez’s 2016 horror film “Don’t Breathe,” has been tapped to direct the sequel, “Don’t Breathe 2,” an individual with knowledge of the project told TheWrap.

Sayagues wrote the script for the sequel with Alvarez and also co-wrote both the original film and Alvarez’s remake of “Evil Dead” from 2013. “Don’t Breathe 2” will be Sayagues’ directorial debut.

Stephen Lang is reprising his role from the original film as The Blind Man, a seemingly helpless man who turns out to be a deadly killer after a trio of thieves break into his home hoping for an easy score.

The plot details of “Don’t Breathe 2” are being kept under wraps, but the film is set several years after the original and finds the Blind Man living in solace until he’s forced to reckon with his past sins.

Production is expected to begin on the film in April.

Alvarez is producing the sequel along with Sam Raimi and Rob Tapert of Ghost House Pictures alongside Good Universe. Sony Pictures Worldwide Acquisition and its Stage 6 Films division are financing.

“Don’t Breathe” made $157 million worldwide against a budget of $10 million.

Sayagues is represented by WME.

The Hollywood Reporter first reported the news of Sayagues’ involvement.

'The Grudge' US Movie Franchise, Ranked Worst to Best (Photos)

How does 2020’s new entry rank among the Hollywood versions of this Japanese horror series?

The “Ju-On” movies are among the most influential and prolific horror franchises of the last 30 years, but good luck trying to watch them all. Created by Takashi Shimizu, they tell the story of a murder so horrendously violent and hateful that it leaves a house horrifically cursed, so that anyone who enters it takes the evil with them, like a supernatural virus. What began as a couple of short films and TV movies eventually became a full-blown feature film franchise, which then led to a hit American remake franchise, and recently a showdown spin-off in which the ghosts from “The Grudge” fight the little girl from the original “The Ring.”

But since most of the “Ju-On” movies are currently hard to find in America, the remakes are holding down the fort for the series. With a new "The Grudge" in theaters, let’s see how the American films rank up against each other.