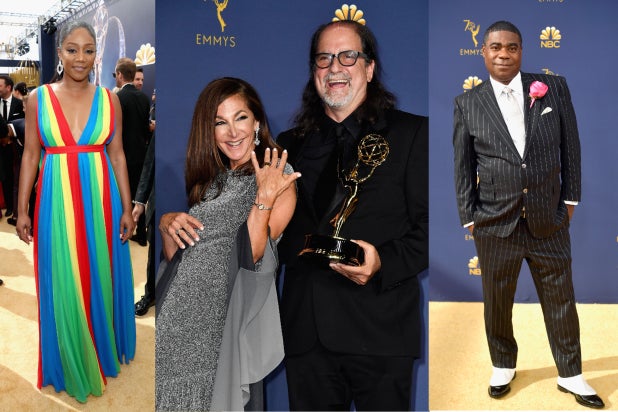 The 70th Primetime Emmys are finished, with “The Marvelous Mrs. Maisel” and “Game of Thrones” taking home the big wins (you can read the full list here).

But the ceremony is a giant production, and TV viewers only get to see a glimpse of the whole shebang. Here are some moments that weren’t featured on TV that TheWrap witnessed firsthand at the Los Angeles ceremony.

1. Besides the Red Carpet, the place to be before the show is the lobby of the J.W. Marriott
While most people were walking the red carpet on a very hot Los Angeles afternoon, the place to relax and cool off before the show was the lobby of the J.W. Marriott, next door to the Microsoft Theater. The room was packed with attendees hanging out in their fancy attire, swinging back drinks and standing in line to take pictures with a giant Emmy statue.

2. Tracy Morgan pays homage to Lucile Ball, Jackie Gleason… and craft services
Though he didn’t win an award, Morgan was one of the presenters Monday night. During his brief remarks in front of the press, Morgan seemed genuinely happy to be there.

“You think about the people that have come through this community, through this institution. You go, wow, the people who have won it. You’re paying homage to them. The people no longer with us: Lucille Ball. Jackie Gleason. Incredible.”

He argued the Emmys are for everyone, not just the winners on the stage, but everyone involved with the shows.”It’s all for the unsung heroes: The grips, the craft services. For them.”

Morgan also had a funny back and forth with a reporter from Australia’s Network 10. When he said he “can’t wait to get back to Australia,” the reporter asked him if that meant he was planning on visiting the country. “Yea, I’m coming back with a snake. The most poisonous one I can find.”

3. Tiffany Haddish scolds the press room… but she gets it
Tiffany Haddish, who won for Outstanding Guest Actress in a Comedy for her hosting stint on “Saturday Night Live” at the Creative Arts Emmys, took a lighthearted jab at the hard-working journalists (including yours truly) in the Emmy’s press room.

“This is really awkward for me, I’m not gonna lie. Nobody is paying attention, you’re all typing. This is rude. If we was at a comedy show right now, I would be cursing all of y’all. But it’s cool. I’m with you. I know you’re doing your jobs.”

Thanks for understanding, Tiffany.

4. Henry Winkler talks doing scenes with Bill Hader on “Barry”
Winkler, who won the Emmy for Outstanding Supporting Actor in a Comedy, gave the press a bit of a behind-the-scenes at look at the filming of his HBO comedy “Barry” with Bill Hader. It seems like Hader has trouble balancing being a producer, writer and actor.

“He would write the script, he would mouth it with you. Even if he’s in your scene you would have to remind him, ‘We’re acting together, I can see your lips moving.’ He would say to me, ‘Henry, please just once say it the way I wrote it so we can hear it.’ My mind and my mouth are not always friends. So I said, ‘Bill, I am trying.'”

5. John Oliver reacts to “Game of Thrones” winning while at the press room mic
Covering the Emmys from the press room is an interesting experience because winners are answering questions while the show is still going. So while John Oliver was at the mic talking about another win for “Last Week Tonight,” his fellow HBO show “Game of Thrones” won for Outstanding Drama Series.

“‘Game of Thrones’ won? For what? Best drama? That’s great! It’s very good!” Way to be a company man, John.

6. Glenn Weiss’s proposal to Jan Svendsen had the press room swooning
You would be hard pressed to find anyone who had a better night than Glenn Weiss. Not only did he win for Outstanding Directing for a Variety Special, Weiss stunned everyone when he proposed to his girlfriend, Jan Svendsen on stage (getting a huge ovation from the press room in the process). Backstage, we witnessed Bill Hader (among many other winners) congratulating the two.

Weiss elaborated on his decision, including that only his father knew of his real intentions. “This was coming,” Weiss said of the engagement. “The timing just lined up really nicely.”

Hamish Hamilton, who was directing tonight’s show, was also competing with Weiss for the directing award. (Hamilton was up for NBC’s Super Bowl LII halftime show). Weiss said he thought about tipping off Hamilton so he could capture Svendsen’s reaction, but thought it would be in bad taste since they were competing against each other.

“I think we’re probably going to hit more parties than we probably were going to tonight,” Weiss ended with. Honestly, those two crazy kids deserve it.