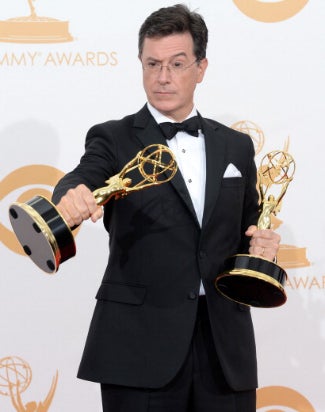 “The Colbert Report” broke the 10-year Emmy winning streak — the longest in history — for Outstanding Variety Series held by its big brother, “The Daily Show.”

In accepting the award for his program Sunday, host Stephen Colbert thanked his “friend and brother” Jon Stewart for encouraging him to act like an “idiot” on TV. Colbert also thanked his late mother for never worrying, and for always believing in him.

The win signals the end of an incredible era of domination for Stewart and “The Daily Show,” and perhaps a passing of the torch in the Comedy Central late night hierarchy.

Though as an executive producer of “The Colbert Report,” technically Stewart did not personally lose the category. The “Colbert Report” writing staff grabbed Emmys earlier Sunday night as well.