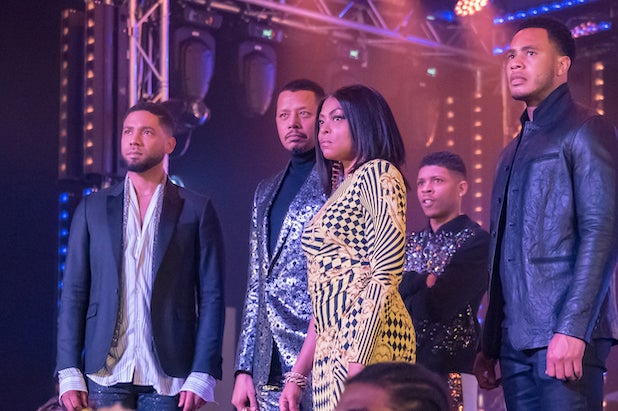 “Empire” returned from winter hiatus on Wednesday, airing its first original episode since star Jussie Smollett was arrested and charged with filing a false police report. It didn’t receive a warm welcome from viewers.

Last night’s 8 p.m. episode settled for a 1.3 demo rating/6 share among adults 18-49, and 4.412 million total viewers — those Nielsen numbers are way down from last year’s comparable hour and are even down double digits versus the hip-hop soap opera’s fall finale.

The previous original “Empire” episode on Dec. 5 had a 1.5 rating and 5.043 million total viewers. Last year’s midseason return put up a 2.0 rating and tallied 6.217 million viewers.

Wednesday’s hour was down 13 percent in both the demo and for the overall audience versus the fall finale, and down 35 percent in the demo and 29 percent in viewers from last year’s midseason premiere episode.

As a matter of fact, last night’s “Empire” drew the second-smallest audience and second-worst demo rating ever for “Empire.” The only episode to draw fewer “live” eyeballs (4.229 million) and a lower demo rating (a 1.2) aired on Halloween 2018, which makes sense, as people were out celebrating and not in front of their TVs.

That said, Fox and its regular abbreviated (compared with CBS, ABC and NBC) primetime schedule still finished first in key-demo averages, but it just barely edged ABC — with a different of 17,000 viewers — for third in terms of total viewers. NBC aired all reruns last night and still landed a bigger audience than both of those nets.

Fox was first in ratings with a 1.2 rating/5 share in the advertiser-coveted 18-49 demographic and third in total viewers with an average of 4.05 million, according to preliminary numbers. Following “Empire,” “Star” at 9 had a 1.1/5 and 3.7 million viewers.

Shortly after this set of Nielsen data came out, Smollett pleaded not guilty to 16 counts of disorderly conduct. Read all about that here.

CBS and ABC tied for second in ratings, both with a 0.9/4. CBS was first in total viewers with 5 million, ABC was fourth with 4.03 million.

NBC was fourth in ratings with a 0.6/3 and second in viewers with 4.2 million, running all repeats.

Also Read: 'Empire': Here's What Jamal Did on the First New Episode Since Jussie Smollett's Arrest

Univision and Telemundo tied for fifth in ratings, both with a 0.4/2. Univision was fifth in total viewers with 1.2 million, Telemundo was sixth with 1.1 million.