“Equity,” for the most part, may be a refreshing story about female investment bankers — and coders and investigators — who can behave just as ferociously as men in their respective careers. But whereas Meera Menon’s film portrays the pitfalls that often await women who work in a predominantly male business, it’s also overcharged with so much grrrl power that it could blackout an entire Wall Street block.

“Diamonds,” says our heroine, Naomi (Anna Gunn, “Breaking Bad”), when her longtime boyfriend, hedge-funder Michael (James Purefoy), asks why they never got married. She then relates the anecdote about how they met, when Naomi was wearing a pair of diamond earrings — the very ones she’s putting on now — and Michael assumed that his competition bought them for her. But she told him, “I bought them myself.” Feel the burn, alpha dude.

Naomi is known for her successful leveraging of IPOs, though her last try bombed so spectacularly that it haunts her every exchange. Former college classmate Samantha (Alysia Reiner, “Orange Is the New Black”), for instance, is an investigator with a hunch about what went down, so she sidles up to Naomi at a reunion and pretends to be her BFF. But she’s really on the prowl, especially targeting Michael: “We don’t need warm, fuzzy feelings, Frank!” she later tells a colleague who’s trying to surveil the couple. (Footage of them together clearly isn’t enough.) Again: The woman is calling the shots, not her male counterpart. 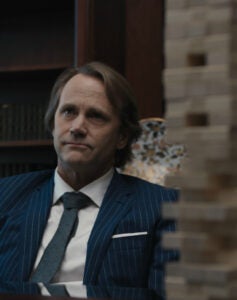 These woman-on-top scenes are sometimes excessive to the point of laughability. Or downright weird: When Naomi demands not the healthy meal her vice president, Erin (Sarah Megan Thomas, on whose story the script is based), brings her on a crucial morning but a cookie like the boys are eating, the fact that an underling brings her one is not enough. After sizing up his math skills and pointing out that his cookie was “oozing with chocolate,” Naomi screams, “And my cookie has three motherf–king chips?” Surely, if this happened in real life, there would be not only snickers but also comments about her time of the month.

Such moments — or, in this case, would-be moments — are the strengths in Amy Fox’s script. Naomi’s boss, Randall (Lee Tergesen, terribly histrionic), tells her that perhaps her last IPO failed because she “rubbed some people the wrong way.” (Deciphered: “You’re a bitch.”) A coder who tests the security of a privacy company’s system tells Naomi that although she’s the best the organization has, she’s treated as if she’s invisible. There’s a tiny subplot about how to handle pregnant employees. And in case you still don’t get the message, Erin is shown reading an article on her phone entitled, “Why Women Still Can’t Have It All.”

Parity is not limited to gender in the script, either: Samantha is not only married to a woman, but a woman of color, which plays less like inclusion and more like the checking of boxes. Still, they and their kids are treated within the story like any hetero family.

The details of the plot are murkier than its point, unless you happen to be an investment analyst. Naomi and Erin work to help the privacy company go public, but Michael’s using his pillow talk in nefarious ways. Lamentable things happen, and fiery exchanges take place. It all happens very quickly, but like in the similar but superior “The Big Short,” you’ll get the gist if not the play by play.

The performances in “Equity” are serviceable and never great, making the film’s small budget show. Gunn and Thomas work well together, though Erin curiously acts and is treated like an assistant instead of a VP. (When she’s up in the wee hours packing for a business trip, her boyfriend comments, “I know, you have to win the bake sale.”) And for a good chunk of the movie, you may be distracted wondering where you’ve seen Reiner before. She’s a bit softer here than in “OITNB,” but equally cutthroat.

Considering the film’s stridently female bent, it’s laudable that by the end of “Equity,” you’re no longer thinking of it as a women’s picture. If only its creators were more subtle, it would be perceived as merely a more estrogen-heavy “The Wolf of Wall Street” instead of a film with an agenda.