It’s been less than four years since Viacom chief Sumner Redstone famously called Tom Cruise "embarrassing," labeled him as a turn-off for all women and accused him of costing Paramount "a lot of money." He also refused to renew the star’s contract.

What a difference a little career upswing makes.

Paramount announced Tuesday that the "Risky Business" actor, whose precipitous fall from the pinnacle of the A-list got him rudely cast off the studio’s lot in 2006, would appear in a fourth “Mission: Impossible” installment.

For the 47-year-old, the return doesn’t just mark his return to the studio that gestated some of his biggest hits over the last two decades — it’s also his best shot at recapturing the Hollywood glory that once surrounded him.

In other words, it’s now or never for Cruise, who made enough career baby steps to get back in Redstone’s good graces.

But to finish the job, "Mission: Impossible 4" — which Cruise is also co-producing — will have to deliver.

Here, TheWrap tracks Cruise’s fall from pop-culture grace … and the slow climb back. 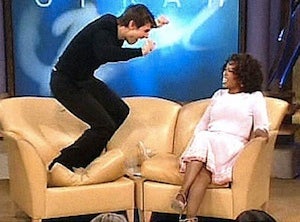 • March  2004: Cruise fires his longtime publicist Pat Kingsley, the powerful gatekeeper who controlled access to him — and kept the tabloid rumors at bay — for 14 years. He replaces Kingsley with his sister, fellow Scientologist Lee Anne DeVette.

• May 2005: While promoting Steven Spielberg’s “War of the Worlds,” Cruise goes Martian on daytime television, enthusiastically bouncing all over Oprah Winfey’s stage and couch in an awkward attempt to express his excitement over his new relationship with Katie Holmes. The moment is uploaded to YouTube, ridiculed and soundly parodied.

• May 2005: Cruise’s third “Mission: Impossible” installment, which came with a $150 million production budget, fails to catch fire domestically, with the film floundering to $134 million in North America. It goes on to make nearly $264 million in foreign ticket sales, rendering the project profitable for Paramount, but American moviegoers perceive the film to be a dud.

• June 2005: Cruise’s interview with Matt Lauer on NBC’s “Today” show gets dark, with the actor delivering a testy takedown of prescription drugs and modern psychiatry. Again, the appearance is uploaded to YouTube, and Gawker — and pretty much everyone else — has at it.

• November 2005: Cruise’s sister resigns, and the actor returns to the client lists of the professional celebrity publicity industry, hiring Rogers & Cowan’s Paul Bloch. Of course, at this point, the damage has been done. 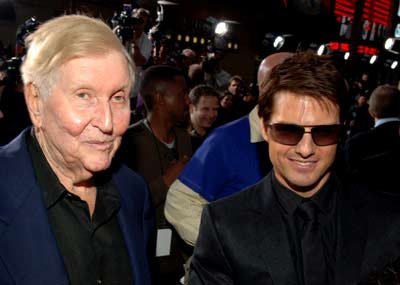 • August 2006: After two highly successful decades on the Paramount lot, Viacom chief Sumner Redstone tells Cruise his production deal with the studio will not be renewed. “He was embarrassing the studio. And he was costing us a lot of money,” Redstone later told Vanity Fair, adding that his ex-wife had influenced his decision to part ways with the actor. “Paula, like women everywhere, had come to hate him,” he said. “The truth of the matter is, I did listen to her. … His behavior was entirely unacceptable to Paula and to the rest of the world. He just didn’t turn one (woman) off. He turned off all women, and a lot of men.”

THE LONG ROAD BACK

• November 2007: Cruise’s first project under the MGM/United Artists banner, the heavyweight war drama “Lions for Lambs,” is a critical dud – “a talkathon with a certain amount of military action,” as Roger Ebert put it. The ensemble drama, which also featured Meryl Streep and Robert Redford, broke even at the box office, taking in $63.2 million globally on a $35 million production budget.

• March 2008: At Cruise’s request, Redstone joins him for lunch at the Polo Lounge in Beverly Hills. The mogul told the Wall Street Journal, “We agreed the past is the past and we would put it behind us and renew our relationship.” 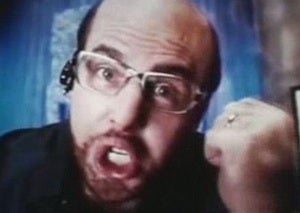 as bald, hairy rage-aholic movie mogul Les Grossman. In fact, the whimsical role — for which Cruise donned a fat suit and skull cap — gave him and his dwindling number of fans just what they needed: a good laugh.

• December 2008: Cruise’s second MGM/UA movie, the Nazi spy thriller “Valkyrie,” gets lukewarm reviews (a 63 percent fresh score on Rotten Tomatoes) and middling box office ($200 million on a $75 million production budget). The movie is by no means a triumphant return, but considering the level of Schadenfreude and talk of an impending bomb, it doesn’t hurt.

• February 2010: Cruise and Paramount announce that they’ve agreed to do a fourth “Mission: Impossible” installment, putting Cruise right in the lap of Paramount, the very studio that kicked him to the curb just three and a half years prior.