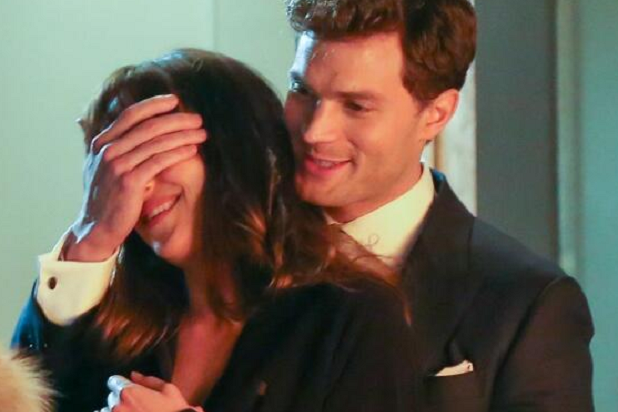 Jamie Dornan and Dakota Johnson star in “Fifty Shades,” which Universal Pictures and Focus Features rolled out with early screenings in 2,830 theaters starting at 8 p.m. Thursday. On Friday, it begins what is expected to be a record-breaking run in 3,646 theaters in North America over the Presidents Day weekend, which includes Valentine’s Day Saturday and the holiday on Monday.

“Fifty Shades” will top the record for a Presidents Day weekend debut of $63.1 million, currently held by 2010’s “Valentine’s Day,” say analysts. And it could threaten the record for an R-rated opening of $85.9 million set by “The Hangover II” in 2010, they believe.

That makes it a given that it will top the weekend’s only other wide opener, the Colin Firth comic book adaptation “Kingsman: The Secret Service,” and last weekend’s leader “The SpongeBob Movie: Sponge Out of Water.”

The Twentieth Century Fox-distributed “Kingsman” took in a very strong $1.4 million from 2,569 theaters Thursday night, and is pointing for $30 million over the four days. The fast start by the R-rated action-adventure film, which is directed by Matthew Vaughn and co-stars Samuel L. Jackson, signals that it should be a big weekend for the overall box office.

“Fifty Shades” will also roll out in nearly every major international market as well this weekend. It opened in 30 countries on Thursday, after debuting at No. 1 in France and three other markets on Wednesday.

Also Read: ‘Fifty Shades of Grey’ Debuts at No. 1 at French Box Office

Domestically, the core audience for “Fifty Shades” is the more than 100 million people who have read James’ trilogy about the kinky relationship between mousy lit student Anastasia Steele (Johnson) and the wealthy and mysterious businessman Christian Grey (Dornan).

“Fifty Shades” will hit the box-office heights if enough people who have not read the book turn out, and women attend in groups and turn “Fifty Shades” into a “girls’-night-out” event, say analysts.

That’s what happened back in 2008 when packs of young women hit the town and drove Warner Bros.’ “Sex and the City” to a $57 million opening that set a record for romantic and R-rated comedies.

Tracking has been strong and steady for weeks on “Fifty Shades,” and its trailer was the most-viewed on YouTube last year. Social-media volume has been pacing with some of Hollywood’s biggest franchises, and “Fifty Shades” has collected almost 8 million Facebook fans. It has dominated advance ticket sales for weeks at Movietickets.com and at Fandango, and it has been the fastest-selling R-rated film ever at both online retailers.

The lack of comps and so-so reviews — it’s at 43 percent positive on Rotten Tomatoes — seem to be the only question marks.

But even if “Fifty Shades” doesn’t go through the roof, it will be a big financial win for Universal. The production budget is $40 million and even if the marketing spend approached that, its grosses will cover those costs in days. And the two stars are under contract for potential sequels.

“Fifty Shades of Grey” is directed by Sam Taylor-Johnson from a screenplay written by Kelly Marcel, and co-stars Marcia Gay Harden and Jennifer Ehle. It was produced by Michael De Luca and Dana Brunetti and author James.