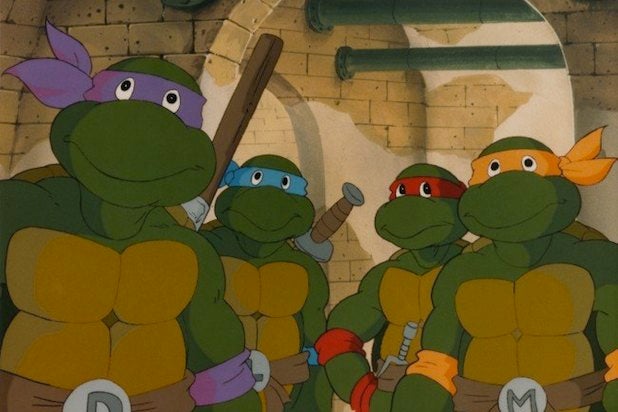 Editors Note: TheWrap has removed the leaked photos at the request of Paramount Pictures.

The buzz surrounding the Michael Bay-produced reboot of the “Teenage Mutant Ninja Turtles” franchise has been iffy, at best, but the first images of the reptilian warriors in the upcoming live-action film may boost the Paramount release’s credibility with fans.

No longer are Leonardo, Raphael, Donatello and Michelangelo just friendly masked turtles who stand on two feet and love to eat pizza like they were in the original animated series (above), which aired from 1987 to 1996.

In images leaked online this week, they appear to be jacked fighting machines who look just as tough and intimidating as their arch nemesis, Shredder — who also looks especially menacing in the latest incarnation of the comic book characters created by Kevin Eastman and Peter Laird in 1984.

Despite their edgier appearance, Bay has promised in the past that the foursome will be “funny and completely loveable.” They’re also spawned by alien invaders in this version, which had fans up in arms in 2012, however, Bay urged them all “to take a breath, and chill.”

Jonathan Liebesman (“Wrath of the Titans”) is directing the Aug. 14 release, in which Megan Fox, William Fichtner, Whoopi Goldberg and Will Arnett star.