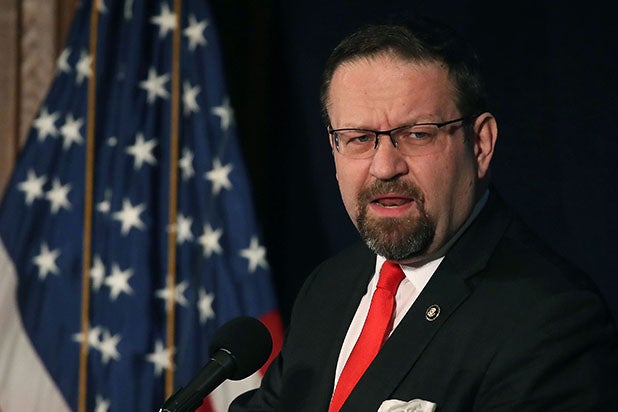 Seb Gorka is no longer a contributor with Fox News after having parted ways with the network, a confirmed to TheWrap.

Details about his departure — including when and why the split happened — remain unclear, with the network declining to offer any additional information. Gorka did not immediately respond to request for comment.

Once an editor at Breitbart, Gorka rose to prominence with the election of Donald Trump, becoming a special assistant to the president in 2017. His combative media appearances made him a household name and earned him special favor with Trump — who is notorious for monitoring cable news coverage of himself.

After leaving the White House, Gorka was signed as a Fox News contributor in November 2017 with the formal title of “national security strategist.”

“Welcome to the Fox family,” primetime host Sean Hannity told Gorka on set when first announcing the news. “You’re a true patriot hero and an amazing, amazing political analyst and strategic analyst. Thank you for being with us and we’re so happy for your success.”

Since leaving the White House, Gorka has become a cult figure in conservative circles, most recently drawing wide applause for his speech to the 2019 Conservative Political Actions Conference. During the talk, Gorka inveighed against the dangers of Communism and warned about the geopolitical challenges of Russia and China. He also took the requisite swipes at Rep. Alexandria Ocasio-Cortez — which included a memorable line about Stalin and hamburgers.

Since leaving the White House, Gorka has dipped his toe into a variety of media, signing up with Salem Radio for a new daily gig in January. Gorka told The Hollywood Reporter that he left Fox News to pursue a new full time deal with Sinclair TV. A rep for the network did not immediately respond to request for comment from TheWrap.