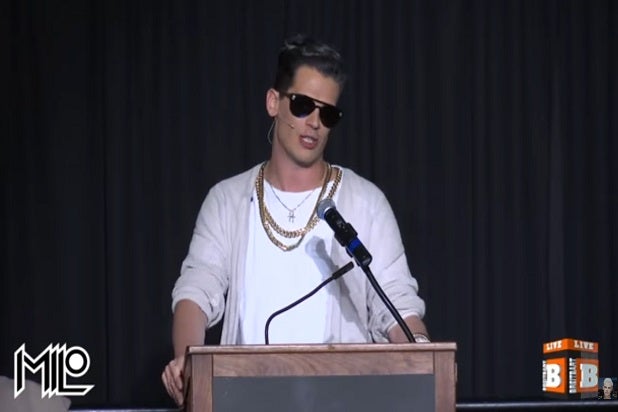 The conservative student group hosting a “Free Speech Week” speaking series on the campus of the University of California at Berkeley on Saturday canceled the four-day event the day before it was expected to begin.

“It is extremely unfortunate that this announcement was made at the last minute, even as the university was in the process of spending significant sums of money and preparing for substantial disruption of campus life in order to provide the needed security for these events,” university spokesman Dan Mogulof told The Los Angeles Times.

Right-wing provocateur and former Breitbart News editor Milo Yiannopoulos, who had been touting the event for weeks, claimed that he was “blindsided” by the decision of the student-led Berkeley Patriot to scuttled the speaking series.

In a press conference that was livestreamed on Facebook Saturday, Yiannopoulos vowed to continue with an “unofficial” speaking event.

“There will be a March for Free Speech through UC Berkeley on Sunday at noon with me and other Free Speech Week speakers,” Yiannopoulos said in a lengthy post on Facebook. “We will march through Sproul Plaza, where the Free Speech Movement began and where we will begin to lead a new one… If we do not protect free speech for those with whom we disagree, there is no point in protecting it at all.”

On Monday, Yiannopoulos released a statement blaming the university for using “bureaucratic maneuvers and strategic media leaks to disrupt the event and dissuade headline speakers from attending.”

Mogulof flatly denied that assertion, noting that conservative pundit Ben Shapiro had spoken on the campus earlier this month without incident.

Eleven of the 17 speakers listed by organizers have not confirmed that they will attend, UC Chancellor Carol Christ said in a statement on Friday.

And other headline speakers, including commentator Ann Coulter, also canceled their plans to attend.

Yiannopoulos had touted former White House adviser Steve Bannon as a speaker, but the Breitbart News boss has not confirmed his appearance with the university or reached out to plan his security, Mogulof told TheWrap on Friday. Bannon did not respond to TheWrap’s request for comment.

At least four of people listed by organizers as speakers at the event, which is scheduled to begin on Sunday, have said they were never even contacted by Yiannopoulos or student organizers.

They include Charles Murray, Heather MacDonald, Michael Malice, and James Damore, the former Google engineer who was fired for his anti-diversity memo, Vanity Fair reported.