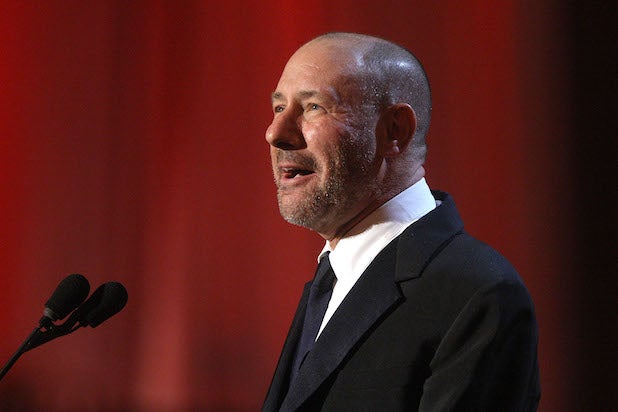 Steve Golin, the founder and CEO of Anonymous Content, was remembered Monday for supporting projects as varied as David Fincher’s video for Madonna’s “Vogue” to David Lynch’s “Wild at Heart” to the Oscar-winning “Spotlight.”

“My heart is broken. Rest In Peace, Steve Golin,” Esmail said in a tweet Monday. He was one of many filmmakers and industry insiders who remember Golin’s immense impact on American cinema.

“I would not have a career if it weren’t for Steve, and the same can be said for scores of writers, actors, directors and producers,” tweeted “Quarry” producer and writer Michael D. Fuller. “His advocacy on behalf of his fellow artists was unparalleled. This is just devastating.”

“Steve Golin gave more to this world than he took, he inspired and allowed so many of us to reach our full potential,” tweeted documentarian Brett Morgen. “He was a great man who left us way too soon. He will be deeply missed but his spirit will continue to grow in our deeds and work.”

Upon founding Propaganda Films in the mid-’80s along with his partner Joni Sighvatsson, Golin was one of the first to recognize the potential for visionary filmmaking and talent to be found within the boom of music videos during the heyday of MTV.

Madonna’s iconic video for “Vogue” was directed by David Fincher, who proved to be one of Propaganda’s earliest discoveries and led Golin to put Propaganda’s stamp on some of Fincher’s early films like “The Game” and “Alien 3.” Propaganda also purchased the film rights to the novel “Wild at Heart,” which David Lynch was inspired to direct himself after Golin brought it into the fold.

“He said, ‘If you don’t mind, I’d like to do this one myself,'” Golin recalled of Lynch in a 1990 Los Angeles Times profile.

A 2004 Los Angeles Times piece described Golin hiring Michael Bay after watching a video reel featuring Donny Osmond and a spec commercial for Coke. He brought Spike Jonze into the company after seeing a few skateboarding videos. Golin sat in the editing room for hours on end with Michel Gondry while crafting “Eternal Sunshine of the Spotless Mind.”

“People want to work with Steve because they trust him,” said “Eternal Sunshine” writer Charlie Kaufman in the 2004 Times profile. “He’s a very real guy, and he’s always been creatively helpful.”

Anonymous Content also found untapped potential in the screenplays listed on the annual Black List. The organization tweeted their praise of Golin on Monday, calling him “an ally to storytellers in Hollywood.” Among the Black List screenplays Golin produced were “The Beaver,” “Fun Size,” “Triple Nine,” “Married Life,” “Rendition,” “Babel,” “The Revenant,” and “Spotlight,” the latter of which earned Golin an Oscar when “Spotlight” won Best Picture.

“It’s all about material,” Golin told the LA Times in 2004. “We have all these great directors at our company, but they could all be my best friend and if I don’t have good material, they’re going to go off and work somewhere else.”

Some of the online reaction to Golin’s passing is below.

My heart is broken. Rest In Peace, Steve Golin.

So sad to hear Steve Golin has passed away. A champion of diverting, cutting edge cinema. I fondly remember us doing a Q&A at the New Beverly for ‘Wild At Heart’ sitting with him at the back as it rocked the place. Then Laura Dern showed up bringing Lynch with her! A magic night.

Straight up, Steve Golin is one of the people whose careers I aspired toward. We were at a dinner together less than three weeks ago. What a colossal loss to everyone in the film and television industry and who watches film or television.

I would not have a career if it weren’t for Steve, and the same can be said for scores of writers, actors, directors and producers. His advocacy on behalf of his fellow artists was unparalleled. This is just devastating. https://t.co/BcT2Jt8Vmt

Steve Golin gave more to this world than he took, he inspired and allowed so many of us to reach our full potential. He was a great man who left us way too soon. He will be deeply missed but his spirit will continue to grow in our deeds and work.

RIP Steve Golin, an ally to storytellers in Hollywood who helped usher Black List scripts like SPOTLIGHT, THE REVENANT, BABEL, RENDITION, THE BEAVER, FUN SIZE, TRIPLE NINE, and MARRIED LIFE to the screen.

You will be dearly missed, Steve. pic.twitter.com/9QMwYRLZAM

From WILD AT HEART to SPOTLIGHT and THE REVENANT Steve Golin was a producer with near impeccable taste. RIP. https://t.co/JqOGDK1DnF

Steve Golin was one of the first people to believe that I had a vision worth fighting for. There was so much I loved about him but my favorite thing was how much he loved Joy Gorman. I will miss him.

By all accounts, Steve Golin was the best. His legacy of incredible talents that he nurtured, films he fought to make and colleagues he believed in will live on.

This one feels beyond sad, heavy and difficult. Steve Golin created spaces and atmosphere directors could create and thrive in. A rare gift in Hollywood. Propaganda Films was such and my memories and the memories many are with Steve and his family today. Thank you and RIP SG.