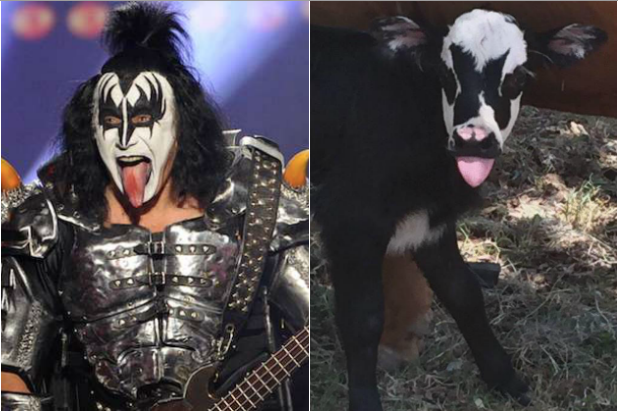 A four-day-old calf has become the most famous bovine on the internet thanks to her uncanny resemblance to KISS frontman, Gene Simmons.

The newborn animal’s name is Genie, and yes, she is named after her celebrity doppelgänger.

According to the Associated Press, Genie lives on a ranch in Kerville about 60 miles outside of San Antonio, Texas. Her black-and-white facial markings and long cow tongue are almost identical to Simmons’ KISSed-out face paint.

Twitter users quickly became obsessed with the unique looking little newborn, and soon enough, even Simmons himself picked up on it — and he’s thrilled. “This is real, folks!!!” he tweeted.

KISS also shared a side-by-side comparison of Simmons and Genie on its Facebook page, which amassed more than 18,000 likes, laughs and ha-has.

Genie may not be old enough to rock all night and party every day, but she can certainly bask in the glory of her internet fame.

Luckily for her, the ranch owners said Genie will not be sold for slaughter, the AP reported.