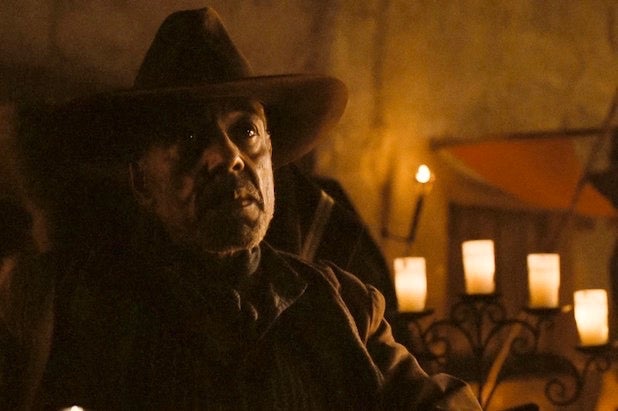 Yes, Evan Rachel Wood, that was Giancarlo Esposito hanging out on the set of “Westworld.” We’re sorry you had to find out this way. But hopefully the performance the “Breaking Bad’ star gave as El Lazo on Sunday’s episode is more than enough to help make up for that white lie he told you last year.

“Being on the set was the most difficult [part],” Esposito told TheWrap in an interview about his cameo Wednesday. “Just to stay in my trailer and not really show my face — be cool about my presence there while I was shooting — was one of the things I had to be conscious of because there were a lot of extras, a lot of actors who clearly I know, and I respect, who just wanted everyone to know, ‘He’s with us out here.’ But after shooting and knowing that the scene had gone so very well, I was really actually even more excited about no one knowing.”

In the episode, titled “Reunion,” Esposito plays El Lazo — the head of a gang of outlaws in the hedonistic Westworld town of Pariah — who the Man in Black (Ed Harris) comes to for assistance while looking for “The Door” that the deceased Robert Ford (Anthony Hopkins) is teasing him with in a new game. The MIB brought along host Lawrence (Clifton Collins Jr) as his new sidekick, which made Esposito’s scene all the more entertaining to watch, as Lawrence played the character El Lazo in the park in another life.

And, of course, an impressive scene makes it even more impressive that it remained a secret.

As of Wednesday, Esposito said, with a laugh, that he still didn’t “know what anyone knows!” And he confessed he had to be pretty shady around the “Westworld” cast to keep his cameo on the DL — including Dolores Abernathy herself.

“So then I got really excited,” Esposito said. “I was at a party for the Emmys and some of the other actors from the show were there who I had not seen on the days that I was shooting. They said, ‘Oh, you were on our show!’ And I went, ‘Nooo, not me.’ And Evan Rachel [sic] [laughs]. And I said, ‘But it’s nice to meet you.’ ‘No, you were on our show! No, we were doing a scene at the other location and we were waiting for Sir Anthony Hopkins to come out of your trailer, because he’s such a big fan and he wanted to see you.'”

“And I said, ‘Nooo, I don’t think so. I think you must be mistaken’ — and they bought it!” Esposito said, laughing. “Actors who are on the show, who were there on another hill the day I was there! And I was just very excited about even trying to fool them. It gets to be a bit of a game and it’s fun when you think about it.”

Pausing here for a minute because, yes, you read that right: Hopkins — whose character died at the end of Season 1 — was on set when Esposito was there filming for the current installment.

Earlier this week, HBO confirmed Hopkins had done voiceover work as Ford for last Sunday’s premiere, providing this statement from co-creator Jonathan Nolan to Uproxx about the actor’s involvement in Season 2:

“When available Anthony Hopkins graciously lent his vocal performance for our flashbacks.”

The premium cabler had no additional comment about Hopkins’ presence on set when reached by TheWrap.

OK, back to Esposito, who said landing this gig was “kind of an inside deal.”

“Well you know, I’ve been doing this show called ‘Better Call Saul’ [laughs],” Esposito said of his work on the “Breaking Bad” prequel series. “I was doing that show, and my guess is that most of it is, this is another top of the heap, an A-listed show.” Esposito said the AMC drama’s producers were approached by “Westworld” showrunners Nolan and Lisa Joy about a cameo, and that was that.

Also Read: 'Westworld': Every Sad or Confused Face James Marsden Made in the Season 2 Premiere (Photos)

“All of a sudden I was on the phone with Jonathan and with Lisa and they were describing everything,” Esposito added. “And I was just like, ‘Oh, this world is a world I want to be a part of.’ It came kind of through the backdoor. Because I was told they were writing this character and they could think of no one to play it but me. But they weren’t sure it would happen. But everyone was so amenable and I loved the idea, so I said yes.”

Sadly, Esposito’s version of El Lazo was not long for this world, as his cameo lasted about 5 minutes before he and his crew all shot themselves in the head to force Harris’ character to play Ford’s game alone. But because he’s a host and could come back, we of course had to ask if he would come back.

“You know, I would love to, because I think for me it’s really about being able to have the tools,” Esposito said. “And I’m that kind of actor who when I think about the scene now in a different way, yes a very short period of time on screen, a lot of information to unpack — as you put it — and speak to. But I think this is what I love about the work I do. It’s really about the subject matter. It’s about how we grow from the story and are entertained by it and titillated by it.”

“So if I had the opportunity to come back, and particularly this scene and El Lazo,” he continued. “He’s a guy who has been someone else, and then he’s channeling Ford and a bigger piece of this whole story than I think anyone would ever imagine. So I would love to come back and sort of unpack that and see what that looks like. And wow, I think there are some surprises there to be had that would be really, really, exciting for the audience as well.”