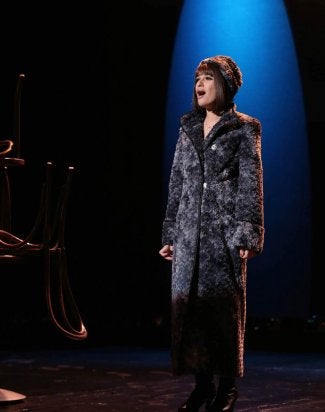 From the small screen to the big stage? In a story of art possibly imitating art, “Glee” star Lea Michele and series co-creator Ryan Murphy are considering bringing the classic Barbra Streisand musical “Funny Girl” back to Broadway. On the latest season of “Glee,” Michele’s Rachel Berry is earning rave reviews for her starring role in a fictional “Funny Girl” revival.

Murphy spoke about the possibility in the latest issue of Entertainment Weekly. “I have the rights to it,” he said.” It’s something that we’re talking about. I’ve never done Broadway. I’ve always wanted to.”

This doesn’t mean anything is officially in the works, though. For one thing, the pair have a final season of “Glee” to get through next year. Further, Murphy said it would require Michele to be on board for another Broadway stint, as well as “the right director and the right leading man.”

Michele’s career began on Broadway at eight years old. It was there that Murphy found her for “Glee,” creating the role of Rachel Berry specifically for the star. “Funny Girl” premiered on Broadway in 1964 and was nominated for eight Tony Awards. Streisand reprised the role of Fanny Brice for a film version of the musical in 1968, earning an Academy Award for her performance.