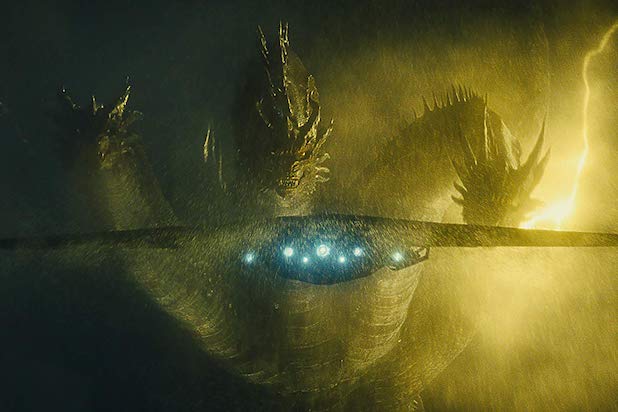 “Godzilla: King of the Monsters,” the follow-up to 2014’s “Godzilla” and 2017’s “Kong: Skull Island” in Warner Bros. and Legendary’s MonsterVerse, stomped into the Thursday box office and earned an impressive $6.3 million.

The latest “Godzilla” film will be locked into an epic battle with another behemoth as Disney’s “Aladdin” enters into its second weekend and hopes to hang onto the top spot at the box office. It also opens against Universal and Blumhouse’s horror film “Ma” starring Octavia Spencer and “Rocketman,” Paramount’s music biopic on the life of Elton John.

“King of the Monsters” is projected for an opening weekend between $55-65 million. It currently has a 41% score on Rotten Tomatoes. The previous “Godzilla” film earned $9.3 million at the Thursday box office in the summer of 2014 and opened to $93.1 million. “King of the Monsters” however is tracking closer to “Kong: Skull Island,” which earned $3.7 million in Thursday previews before opening to $61 million in March 2017.

“Rocketman” blasted off to $1.75 million in its Thursday night previews, and it received $580,000 from early Fandango screenings on May 18, bringing its domestic total thus far to $2.3 million. It opens on approximately 3,600 screens this weekend and has already performed strongly in the U.K. after opening there last week.

Paramount is projecting a domestic opening between $18-20 million, with independent trackers saying the film could go as high as $25 million. Comparisons to “Bohemian Rhapsody” are inevitable as it is the latest music biopic about a British rock sensation and both films share Dexter Fletcher as its director. “Bohemian Rhapsody” opened in the fall to $51 million after taking in $3.9 million in Thursday previews.

For other recent music biopic comparisons, the Tupac movie “All Eyez on Me” debuted in the summer of 2017 and made $3.1 million on Thursday night before opening to $26.4 million. And the faith-based biopic, “I Can Only Imagine,” made $1.6 million in previews and opened to $17.1 million.

“Rocketman” stars Taron Egerton in a fantastical jukebox musical about Elton John that uses the iconic pop singer’s greatest hits in order to tell his life story from his start as a boy named Reginald Dwight to eventually battling substance abuse addiction. Jamie Bell, Richard Madden and Bryce Dallas Howard co-star, and reviews and early reaction following its premiere at Cannes have been strong. “Rocketman” currently has an 89% score on Rotten Tomatoes.

Finally, “Ma,” from Universal and Blumhouse, made $1.4 million in its Thursday previews from 2,400 theaters. “Ma” is projected for a $20 million opening, with Universal projecting a start in the mid-teens against a $5 million production budget. It has a 64% score on Rotten Tomatoes.

For comparison, Blumhouse’s “Truth or Dare” from last year, which was made for a $3.5 million budget, opened wide opposite “Rampage” and made $750,000 in Thursday previews and went on to gross $18.6 million during its opening weekend. Blumhouse’s “The Visit” made $1.02 million on its Thursday and opened to $25.4 million, and “Tyler Perry’s Acrimony” made $1 million Thursday and opened to $17.1 million.

Oscar-winner Octavia Spencer stars in the film as a fun-loving mom who befriends a group of high school kids by buying them alcohol and giving them a place to party, only to reveal she has a dangerous obsession and hidden motive in keeping them coming back to her home.