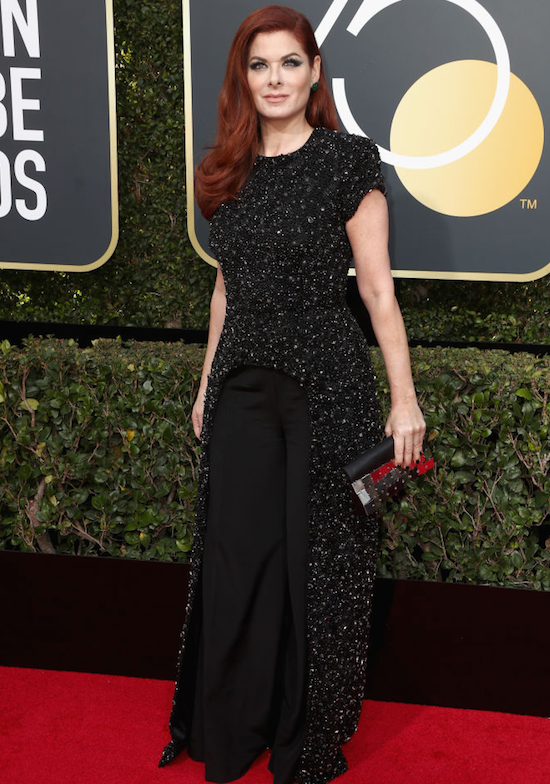 Getty Images
Debra Messing  "I am wearing black to thank and honor all the brave whistleblowers who came forward and shared their stories of harassment and discrimination," Messing said on Sunday's Golden Globes red carpet. She added that she's "shocked to to hear E! doesn’t believe in paying their female hosts the same as their  male hosts," referring to Catt Sadler's exit from the network after learning she wasn't paid as much as her male counterpart, Jason Kennedy. "Women are just as important as men," she said. 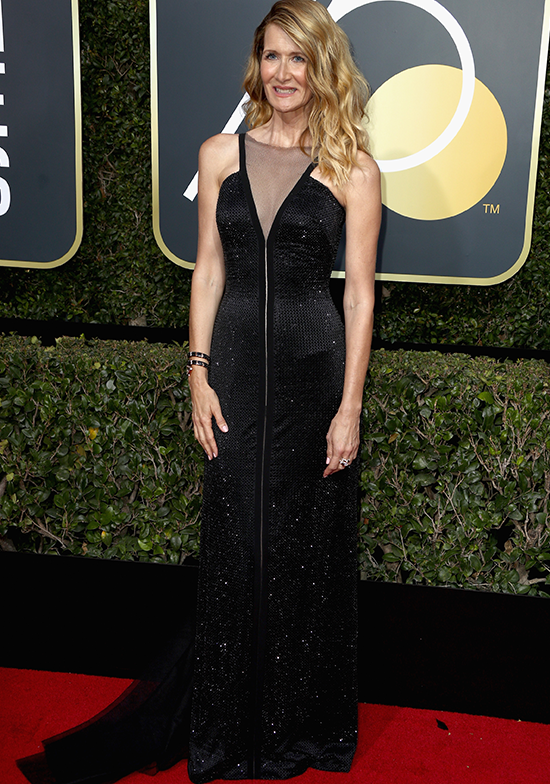 Getty Images
Laura Dern The "Big Little Lies" actress said on Instagram that she is "holding our mothers and grandmothers and all brave women who taught us about Voice" by wearing black on the red carpet. On the carpet, she added, "It’s time for us to make a difference, and everyone can make a difference." Dern brought along activist Monica Ramirez, who said, "When we learned about what was happening in Hollywood, our members felt very strongly they wanted to send a message… that they are not alone... Part of our work is to fight for gender parity along all lines." 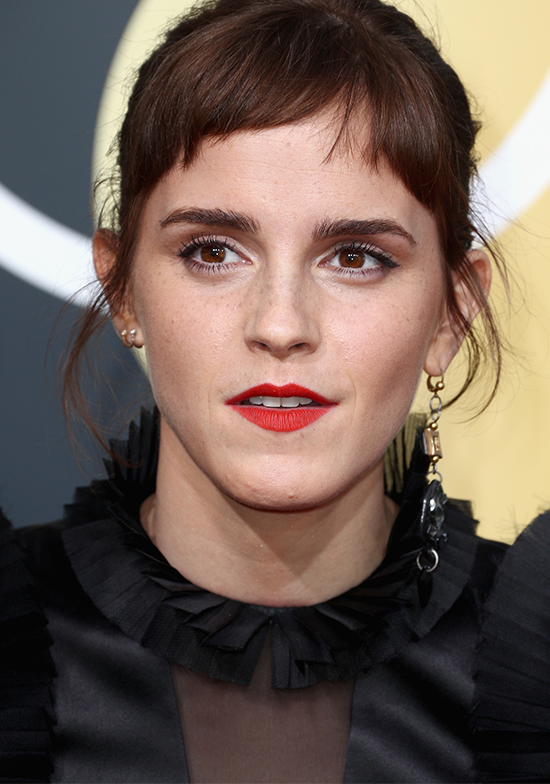 Getty Images
Emma Watson The "Beauty and the Beast" star said on Twitter that she's wearing black on the red carpet "because we are grateful to the many survivors and allies who have spoken out and and forced the conversation about sexual harassment, sexual assault, and gender bias in the spotlight." Larasi, a women's activist, accompanied Emma Watson on the red carpet. "There’s something about women in Hollywood speaking out," she said of the Me Too movement. "There is a wall of silence that surrounds women and girls [who are harassed or assaulted]. We don’t want to create hierarchies.. But we’re saying women in Hollywood have [an opportunity] to amplify [the message]. It's a fantastic platform." 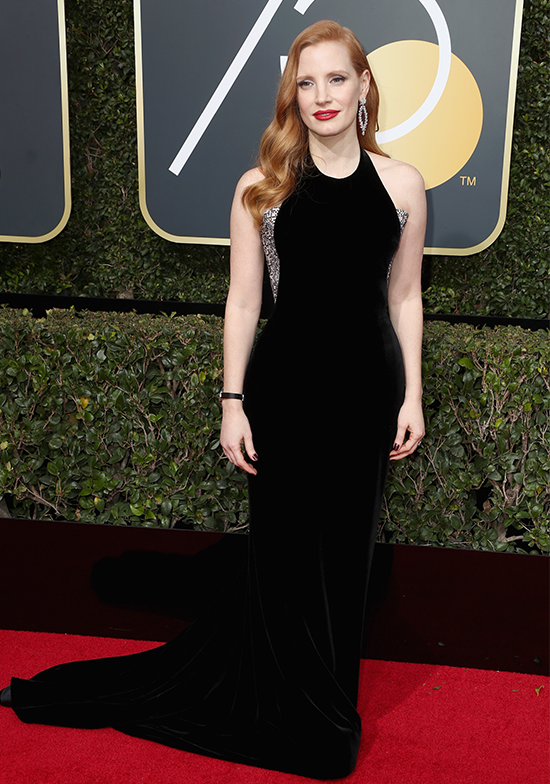 Getty Images
Jessica Chastain The "Molly's Game" star said, "I wear black to stand in solidarity with my sister's and to say it's #TimesUp on this imbalance of power IN ALL INDUSTRIES " on Twitter ahead of the show. 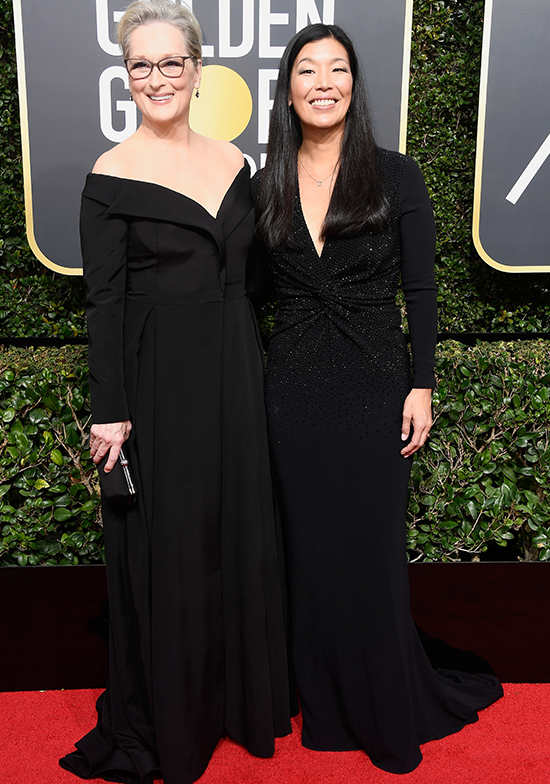 Getty Images
Meryl Streep "The Post" star said, "People are aware now of a power imbalance... It's everywhere and we want to fix that." As for her character in the film, Washington Post publisher Katharine Graham, Streep said she thought she would be "heartened" by the movement sweeping Hollywood and beyond for women's rights. "She was a pioneer," Streep said. "I think she’d be over the moon." 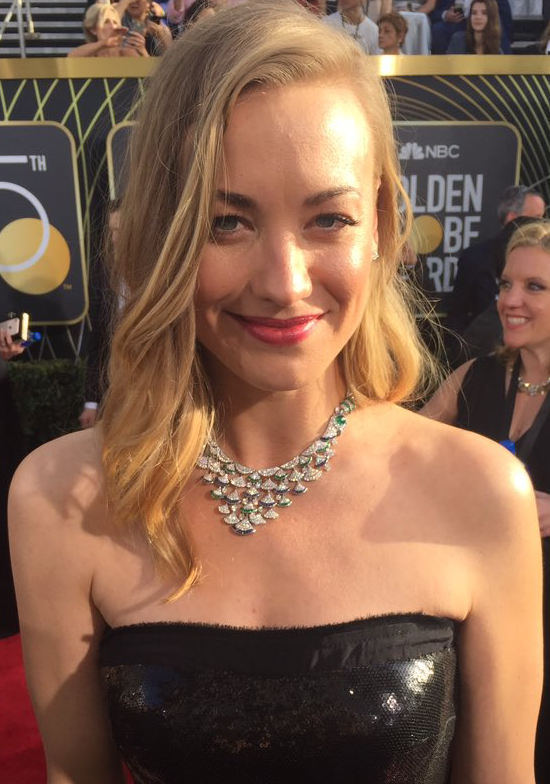 Twitter
Yvonne Strahovski "With the women's march and now this, it really feels like a revolution is taking place. Although it's not going to solve all the problems, I'm proud to be here and to be part of it today," said the "Handmaid's Tale" star. 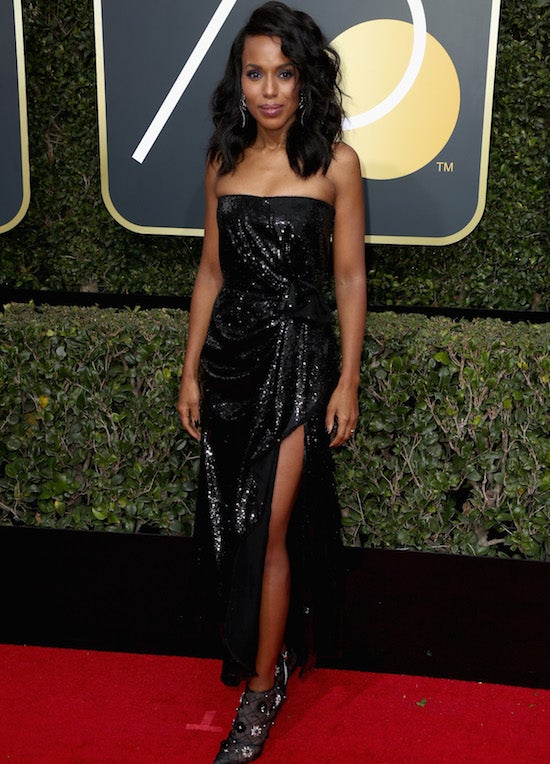 Getty Images
Kerry Washington  "This is such an awesome night to celebrate women and celebrate all of us coming together and standing with each other and standing in solidarity to say 'Time is Up,'" the "Scandal" star said. "This is not a problem in Hollywood, the abuse of power happens everywhere." 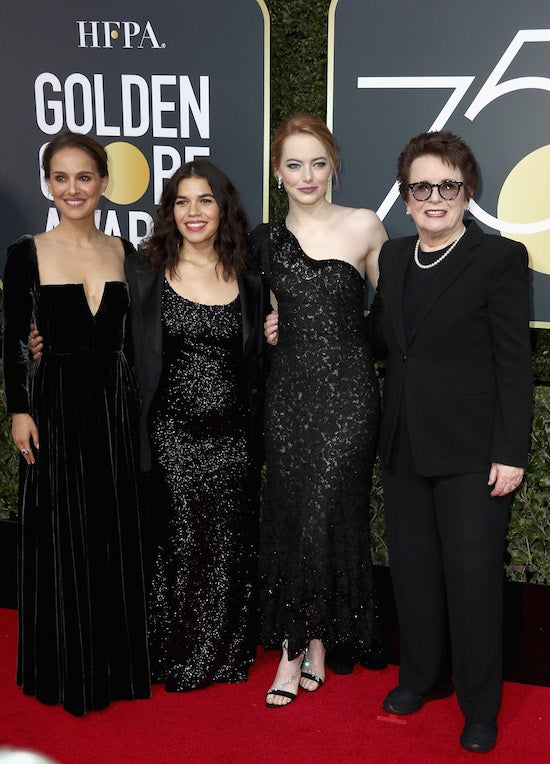 Getty Images
Billie Jean King  "We’re in solidarity about standing up for people who have been abused and have been harassed, and the industry is all staying together on this," said the tennis star, who accompanied Emma Stone on the red carpet. 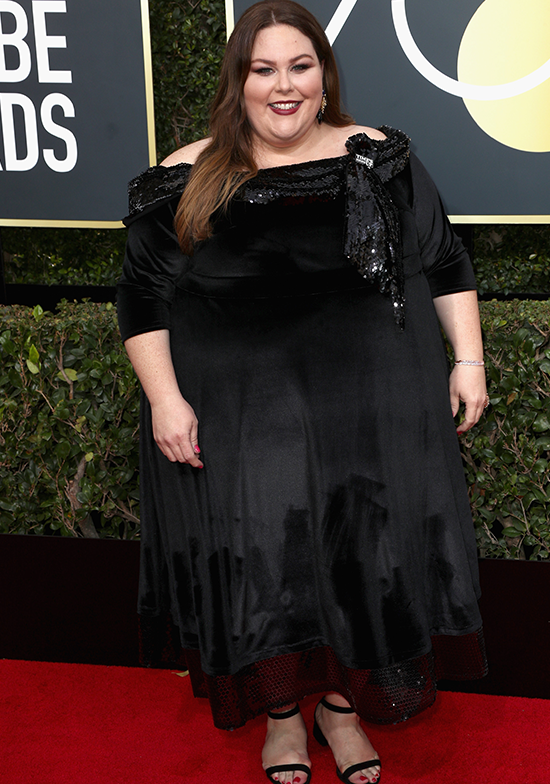 Getty Images
Chrissy Metz Before the red carpet, Metz said she told her publicist "If I can't be who I am I can't do this." On the carpet, she told Ryan Seacrest "We are all meant for something bigger better greater, but we’re not always taught that." 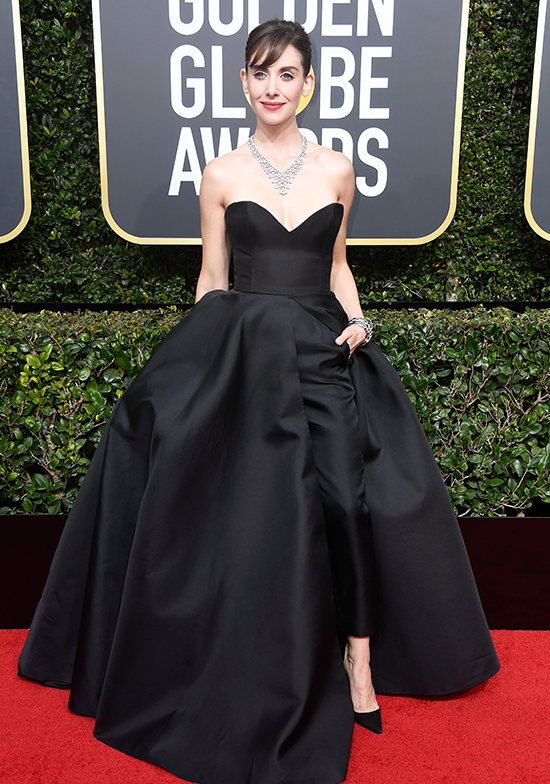 Getty Images
Alison Brie Brie is nominated for her role in Netflix's "GLOW," but also acted alongside Meryl Streep in "The Post." She said, "Meryl Streep playing Katharine Graham was like feminism on feminism." "It’s important to me to stand with all of the women who have come forward," Brie added, wearing a black ensemble in honor of Time's Up and the #MeToo movement. She added that's she's "so in awe of that bravery" of the women who have come forward with stories of sexual harassment and assault, and said, "It’s important for me to stand with those who don’t feel like they have a voice." 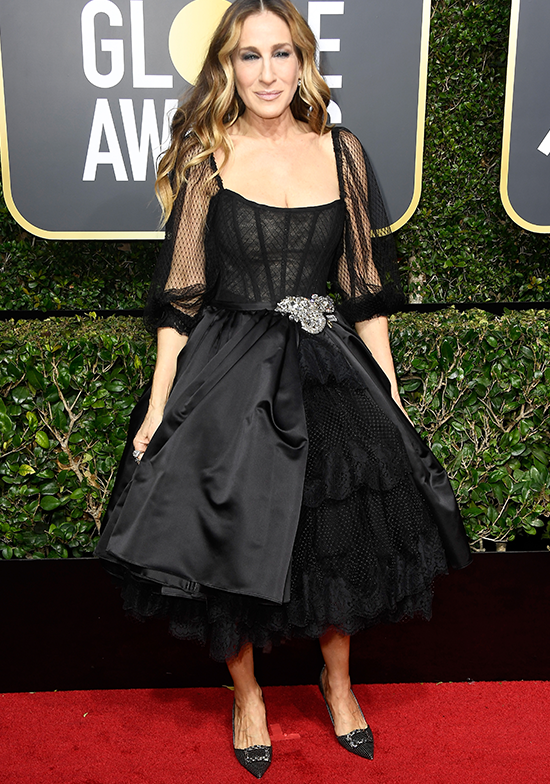 Getty Images
Sarah Jessica Parker "I think it’s an enormous show of support tonight," said the "Divorce" star, who wore a black frock in honor of the Time's Up initiative. "This is a conversation that, as complicated as it is, it seems to be very welcome by everybody," she said to E!'s Ryan Seacrest. "I know it’s affected your network," she added in reference to Catt Sadler, who left E! after learning she earned far less than her male colleague. Parker went on to say that parity and gender equality shouldn't be overly complicated. "It’s about women in all industries, and men," she said. 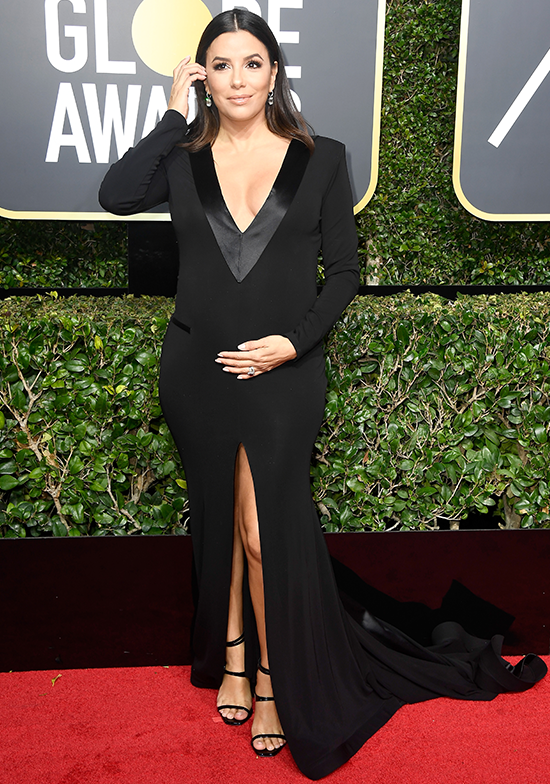 Getty Images
Eva Longoria Eva Longoria joined Reese Witherspoon and Nicole Kidman in talking to Ryan Seacrest about the Time's Up initiative. Like Parker and Messing, Longoria called out E! for paying Catt Sadler less than her male colleague Jason Kennedy. "We support gender parity and equal pay, and we hope E! stands with that," she said to Seacrest.
x
Looks like you're enjoying reading