Japril fans, this one is for you! Jesse Williams and Sarah Drew are returning to “Grey’s Anatomy” to reprise their roles as Jackson Avery and April Kepner for the Season 18 finale, TheWrap confirms.

The episode will air on May 26.

We last saw Japril together during Season 17, when Williams departed the series after 12 years. Drew, who exited “Grey’s” in Season 14, returned for one episode to aid Jackson’s sendoff.

In the episode, titled “Look Up Child,” Jackson visited April to let her know he would be moving to Boston to run his family’s foundation. She decided that she’d move with him, for the sake of their daughter.

The episode left off on a hopeful note for the former couple, after April revealed that she had recently separated from her husband, Matthew Taylor. 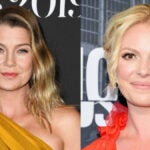 Williams’ last episode as a series regular was the following one. Drew hasn’t appeared in the series again since, but Williams made a virtual appearance in the Season 17 finale.

Hopefully the upcoming Season 18 finale will give a proper update on where the former couple stands one year after their move. The two-hour finale will also mark the 400th episode of “Grey’s.”

The series airs Thursdays at 9 p.m. ET/PT on ABC.