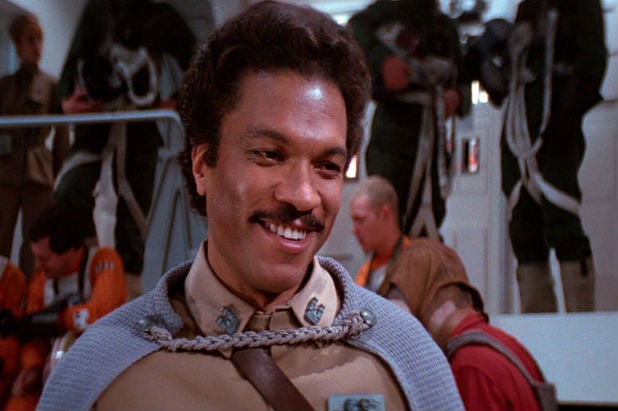 Han Solo is getting a gambling buddy — his standalone “Star Wars” spinoff film is casting a young Lando Calrissian.

Fans have speculated about which of the characters from Solo’s complicated past might turn up in “Han Solo,” and now we know at least one. The Cloud City cassanova was originally played by Billy Dee Williams, and the current code name in casting circles for young Lando is “Chance” — perhaps a reference to the character’s appreciation of cards and dice.

Though we met Lando in “The Empire Strikes Back” — in which Darth Vader forced him to betray Han, Leia, Chewbacca and C-3PO when they turned up at Cloud City — he has a long history with Solo that we may see parts of in the new standalone film. Lando famously lost the Millennium Falcon to Solo in a game called sabacc — though he got to fly it again in “Return of the Jedi.”

The “Han Solo” solo film is being directed by “Lego Movie” and “Jump Street” team Phil Lord and Chris Miller.

Lando’s cape won’t fit just any actor, but these guys could slip into it quite comfortably

Of course the young Han Solo spinoff movie would have to include Lando Calrissian. What we don't know, however, is who's going to take on the role alongside Alden Ehrenreich's Han. Billy Dee Williams was 42 when he shot "The Empire Strikes Back," so we looked for actors younger than that to play Lando in his prequel days.