Hannah Gadsby delivers a warning up front to the audience for her new show, “Body of Work,” particularly those who are expecting the raw confessional tone of her breakout 2018 Netflix special “Nanette” or its follow-up “Douglas.”

What’s striking is that unlike in her previous two shows, the Australian comic delivers a far more conventional routine on two fronts — not only is her material less emotionally charged, but it’s also delivered mostly straight, without the meta framework and exploding-the-conventions-of-comedy mindset that marked her as such a strikingly original voice.

In her first performance at Brooklyn’s BAM Howard Gilman Opera House on Wednesday, Gadsby seems to acknowledge her changed circumstances — including the fact that she’s hobbling about the stage with a large castlike boot on her left leg after a bad fall in Iceland. “I will sit down from time to time, but it doesn’t matter. I’m not a real stand-up,” she jokes, slyly acknowledging critics of her often unconventional approach to comedy. 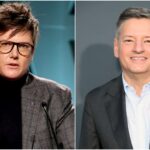 She also acknowledges her growing fame — and how ill-prepared she was to deal with it, particularly given her autism (a main subject in “Douglas”). She recounts embarrassingly awkward encounters with Ruby Rose, Jodie Foster and “Notting Hill” director Richard Curtis that are both self-deprecating as well as humble brags reflecting her new celebrity status.

The bulk of her set deals with discursive tales about her pandemic-fueled romance with an American woman whom she now calls her “spouse lady,” whom she’s nicknamed Jenno, and how ill-prepared she was as a queer woman in her 40s for the customary rituals of courtship, marriage proposals and weddings. “I grew up when gays couldn’t adopt a f—ing highway,” she jokes, and proceeds to recount her unusual proposal and a wedding ceremony that included a shark-themed novelty cake.

Gadsby doesn’t shy away from topical material, with riffs about conservative comic Joe Rogan and what she jokes are his flirtations with trans identity through his use of testosterone-boosting supplements — as well as multiple references to the U.S. Supreme Court’s pending decision that could overturn abortion rights. “I’m afraid for you,” she says, while noting that MAGA fans who bristled at mask mandates during the height of the pandemic are now “chomping at the bit to impose a pregnancy mandate.”

But those timely asides are just that — asides, slipped in amid a carefully crafted set that builds to a deliberately awkward set-piece involving a paper rabbit in the center of the stage. Gadsby remains a gifted storyteller, a talent that she credits to a close study of her mom, and she can spin a yarn with witty wordplay, sharp intelligence and the careful use of callbacks. Good on her. 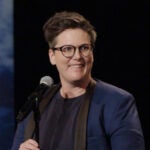 Also Read:
Hannah Gadsby Says She’s Unlikely to Host ‘SNL’ Because ‘They’re Not so Fond of My Work’