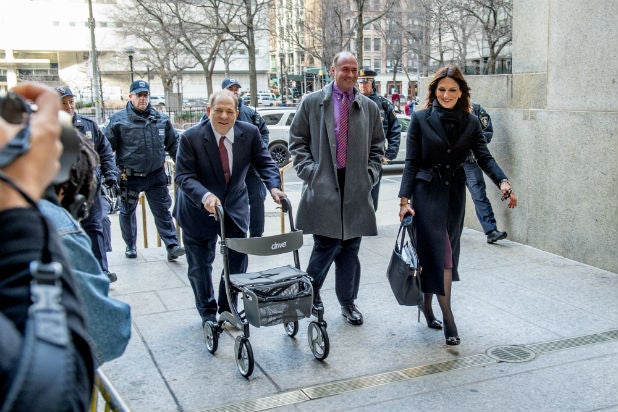 Elizabeth Entin, the former roommate of Miriam Haley (née Mimi Haleyi), the production assistant who accused Harvey Weinstein of sexual assault, testified on Tuesday morning that Haley told her the ex-mogul had sexually assaulted her orally in 2006.

Entin, who was working at the time assisting fashion stylists, said she and Haley first met in London and became close friends after becoming roommates. But one day, Entin said Haley stood by the door of her bedroom, anxiously pacing, and then described her encounter with Weinstein at his SoHo apartment.

“He started rubbing her shoulders, kissing her, she said, ‘No, no,’ and he wouldn’t stop,” Entin remembered Haley telling her. “She said, ‘I’m on my period,’ and he said, ‘I don’t care,’ at which point he threw her down and she was still saying stop, and he pulled off her underwear, pulled out her tampon, and went down on her while she was saying no.”

Entin said she told Haley it sounded like she had been raped and encouraged her to call a lawyer, but she said Haley was still “distraught” and “didn’t really want to pursue it or talk about it.” She also said Haley was more “withdrawn” and spent more time in her room after the alleged incident.

Entin also said that before the alleged incident in Weinstein’s SoHo apartment, Haley had also told her about the time when Weinstein appeared, unannounced, at their apartment and barged in. She said the two had initially tried to diffuse the situation with humor, especially given that Haley told her Weinstein had been afraid of Entin’s small chihuahua.

“At the time, prior to the rape, I didn’t realize it was going to go that far,” Entin said. “We kind of saw it as a pathetic old man trying really hard to hit on Miriam, so we kind of laughed it off.”

The former roommate also testified that she had met Weinstein earlier that year when she accompanied Haley to an event at Cipriani. There, Entin said that Weinstein put his arm around Haley, placed his hand on her stomach, pulled her in close, and said, “This is the hottest woman I know.”

During the defense’s cross-examination, Weinstein attorney Donna Rotunno pressed Entin about the Cipriani encounter, asking her why she did not mention it during her testimony in front of a grand jury. But Entin responded that she hadn’t been asked about it and had only answered the questions asked of her.

Weinstein faces five felony counts, including for predatory sexual assault and first- and third-degree rape. He has pleaded not guilty and denied accusations of nonconsensual sex.