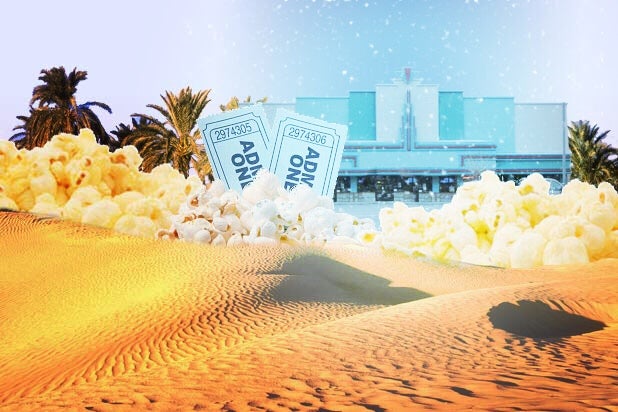 It’s 120 degrees in Laughlin, Nevada, right now. But there’s still one place in the city where people are bringing their sweaters: pleasantly air-conditioned Stadium 9 Cinemas.

As temperatures soar from the high 90s in Los Angeles to past 120 degrees in places like Bullhead City, Arizona, the movie industry sees a bright side in possibly higher ticket sales. That’s certainly the case in Laughlin, according Joseph Switzer, assistant manager at the Stadium 9.

“Even when I put you on hold right now, some people came in and literally said, ‘I’m glad we’re out of the heat,'” Switzer told TheWrap in a phone interview. “They want to come inside where it’s cool to see a movie… It’s unbearable outside.”

There’s no question that the best place to be during a heat wave is the ocean, but the second-best may be an air-conditioned theater watching a movie that takes place in the sea. Enter Disney-Pixar’s “Finding Dory,” which beat initial expectations by roughly $15 million to gross $135 million this past, hot weekend, becoming the top opener of all-time for an animated movie.

Several factors played into the bigger-than-expected box office for the Disney-Pixar sequel — including the fact that school let out last week in most places in the U.S.

But the searing heat didn’t hurt. The film arrived on easily the hottest weekend of the year so far, with temperatures surpassing 100 degrees, even 110 degrees, in parts of Southern California and Arizona.

“Depending on the severity of the heat wave, heat can draw moviegoers to theaters,” said Chris Aronson, president of domestic distribution at 20th Century Fox.

He should know. Another recent record-breaking heatwave in 2013 ushered in the release of the popular Sandra Bullock-Melissa McCarthy comedy “The Heat,” released by Fox.

As temperatures topped 120 degrees during the last biggest heat wave in the Southwest, the R-rated comedy beat expectations by a whopping $10 million, opening at nearly $40 million.

Summer is the season for blockbusters, and while the reasons include kids being out of school and adults taking vacations, the lure of air conditioning may also a factor.

“The movie theater has always been a place to escape the outside world and when that world is blazing hot its a great sanctuary,” said comScore senior analyst Paul Dergarabedian. “And there’s even ice-cream and ice cold drinks!”

“Outside of some blizzards on the weekends, weather has very little effect on the box office,” he said.

The most direct effect weather has had on the box office, however, is extreme winter weather, like when the storm Jonas temporarily closed theaters in New York, New Jersey, Philadelphia, and Washington D.C. in late January. “Some estimated as much as a 15 percent hit to the box office that weekend,” said Patrick Corcoran, vice president of communications at the National Association of Theater Owners.

But he said extreme weather cuts both ways.

“Blizzards and extreme cold depress it, hot weather (and rain in the summer) increase it,” he said.

Back in Laughlin, Switzer sees it firsthand: “On days like today, it definitely has an impact on foot traffic.”