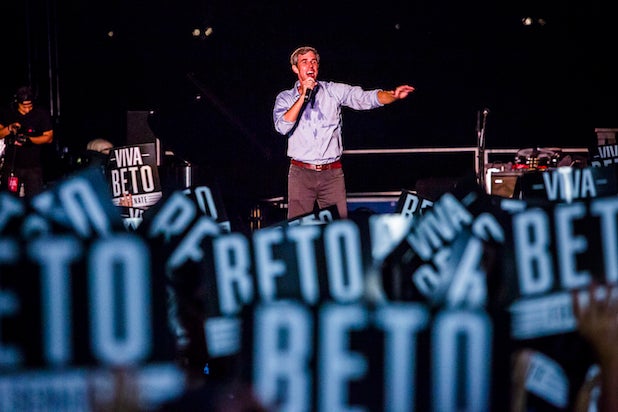 Beto O’Rourke’s loss to Ted Cruz in the Texas Senate race Tuesday night did nothing to dampen the enthusiasm of his supporters, many of whom immediately called on the Democratic congressman to put the Cruz fight behind him and seek the Democratic presidential nomination in 2020.

Leading the pack was one of Hollywood’s biggest Beto Boosters, Alyssa Milano.

Beto lost? That’s ok. Now he can run for President.

As of Wednesday morning, Milano’s call was closing in 10,000 retweets. Many others took up the mantle as well, saying O’Rourke’s near miss against Cruz was proof of his national potential.

Beto might have lost Texas but his loss has paved the way for him to run for President. #Beto2020

Beyond Hollywood, the idea snagged at least one professional voice as well in the form of CNBC journalist John Harwood.

“If Beto gets persuaded to run for president in 2020, he will instantly become a top-tier candidate,” he said in response to the Betomania.

if Beto gets persuaded to run for president in 2020, he will instantly become a top-tier candidate https://t.co/AkjFLKzFt3

Though he did better than any Texas Democrat in a generation, O’Rourke ultimately went down to Cruz, losing the Senate content by more than 200,000 votes.

During an MSNBC analysis of the race, Rachel Maddow said Cruz had savvily turned his “repellent” personality into an asset.

“He has never campaigned as a politician as being a guy you would like to be around. He has campaigned as a sort of World Wrestling villain, right?” said Maddow. “‘Your hate makes me stronger.’ So we’re all talking like that’s a weakness. Ted Cruz knows that he has a repellent personality. He has just turned it to his advantage.”

Beto himself repeatedly ruled out a presidential run on the campaign trail, telling voters his only aim in the race was serving as Senator from Texas.

He went on to drop an F-bomb Tuesday night while thanking his supporters for their spirited challenge against Cruz, saying: “All of you, showing the country how you do this. I’m so f—ing proud of you guys.”