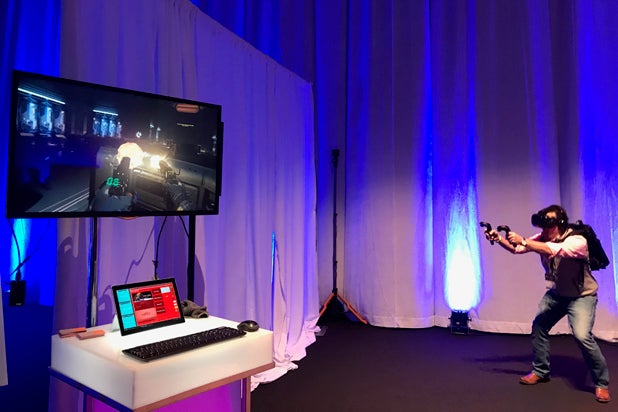 Virtual Reality could make Hollywood storytelling more exciting and involving than ever — but, yeah, vomiting is still a concern.

At this week’s inaugural VRTL Summit on the Paramount Pictures lot in Hollywood, participants agreed that there are valid concerns about how to keep viewers from getting sick. Despite advances in headsets like Samsung’s Gear VR and Facebook’s Oculus Rift, users still get motion sickness in trials — which is especially troubling because some VR projects last hours.

“I remember coming out of the experience being nauseous,” David Alpert, CEO of Skybound Entertainment and executive producer of “The Walking Dead,” said of his first experience using a headset.

“I work on ‘The Walking Dead,’ do you have any idea how hard I work to make people nauseous? This is great!” he joked during a fireside chat in the lot’s Paramount Theater.

Jesse Sisgold, president and chief operating officer of Skydance Media, said that virtual reality’s gift of gag was a concern when the company started developing in the medium — even requiring a C-suite executive’s personal attention.

“He won’t like this, but our CFO [Larry Wasserman] has a very intense level of motion sickness in terms of riding in the backseat of a car and what not,” Sisgold said. “We always used him as the canary in the coal mine.”

Skydance is working on “Archangel,” a first-person shooter game that plays out across six levels of a massive war machine. It hits a majority of VR platforms in July.

Also Read: Why Virtual and Augmented Reality Are Primed for an Explosion in Acquisitions This Year (Guest Blog)

“We took it seriously because our game is potentially a three-hour experience,” Sisgold said. “It all goes into the core, early stage design. No one has had nausea in our experience.”

TheWrap strapped into an Oculus Rift setup and took a spin in the cockpit of an “Archangel,” firing away at enemy aircraft with the multiple giant guns at the machine’s disposal for each arm.  Overly aggressive gameplay made it a shorter-than-hoped-for mission, but the experience was a lot of fun and looked great — and did not leave us (or anyone else we saw) running for a trash can.

In addition to panels, there was a soundstage full of VR demos — where new Paramount Chairman and CEO Jim Gianopulos and his boss, National Amusements President Shari Redstone, took part. Gianopulos opened the proceedings with his first — albeit brief — public comments since assuming his new job at the beginning of the month. Studios including Fox, Lionsgate and Disney’s Lucasfilm were also represented.

Peter Levin, Lionsgate’s president of interactive ventures and games, said the first time he used the HTC Vive was a personal tipping point where he saw VR’s full potential. But it wasn’t just about the console’s speed or smooth graphics. He was also impressed by “the fact that it didn’t cause any residual nausea,” Levin said.

And having the ability to sicken audiences, on purpose, might not be such a bad thing, said Alpert.

“If you can make people feel sick, that’s actually a powerful tool to have in your arsenal,” he said.