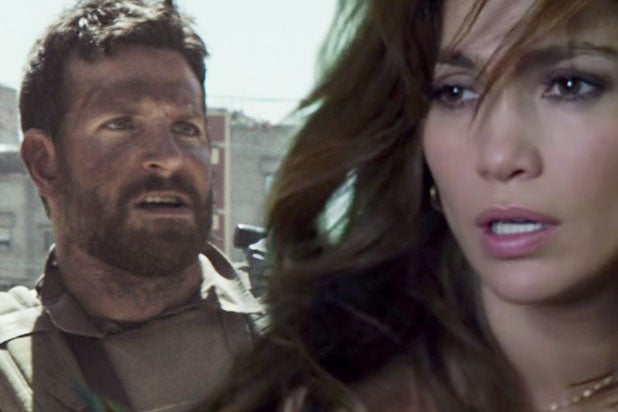 “American Sniper” and the sexy Jennifer Lopez thriller “The Boy Next Door,” the top two movies at the box office this weekend, could be giving Hollywood a glimpse at its future.

The Iraq War saga has turned January, a month that for years has been a box office dead zone, into a hot spot. It’s blitzed the domestic box office for $200 million in 10 days, obliterating records for R-rated movies, holiday weekends and the month in the process.

With its $107 million holiday weekend debut and massive $64 million this past weekend, “American Sniper” has performed like a summer superhero blockbuster, making the most compelling argument yet for releasing major movies year round. It’s a trend that’s been gathering steam for some years, and nearly every studio has experimented. But the success of “American Sniper” should seal the deal.

The $15 million opening weekend for Universal Pictures’ “The Boy Next Door” doesn’t seem that impressive at first glance — until you consider the $4 million production budget.

Any studio would be glad to have a movie that took in nearly quadruple what it cost to make it in its first three days. “The Boy Next Door” did just that, hitting the bullseye with its target demographics, women (71 percent of the audience) and Hispanics (45 percent). Lopez and the studio’s marketers worked hard before the release to make that happen, and producer Jason Blum delivered, too.

He’s the king of micro-budget horror movies, a reputation that grown as his films not only rung up grosses several times their cost but launched franchises like “Paranormal Activity” and “The Purge.” That helped him land a 10-year deal to produce TV and digital content as well as film with Universal last year. And it’s paying off already, because he brought those same hyper-efficient budget sensibilities to “The Boy Next Door.”

Also Read: ‘The Boy Next Door’ Review: Jennifer Lopez Smolders, But the Film Fails to Seduce

Blum did it earlier this year in his first foray out of the genre with “Whiplash,” which he produced with Jason Reitman. That musical school drum drama, made for $3.3 million, has more than doubled its budget for Sony Pictures Classics and captured a Best Picture Oscar nomination and four others.

Warner Bros. execs admit they didn’t expect Village Roadshow’s “American Sniper” to take off like it did — who would? — but knew they had something special in the Clint Eastwood-directed drama starring Bradley Cooper. It was a gamble to release it in January, a month frequently given over to films that studios want to get out and over with.

“I think good movies rise to the occasion, no matter the play date,” said Dan Fellman, the Warner Bros. distribution chief. WB has had success pushing the release date envelope in the past, scoring big with “The LEGO Movie” last February and “Gravity” in October of 2013, both also months that studios had avoided with major releases. And Universal had connected with the Afghan War saga “Lone Survivor” and the Kevin Hart comedy “Ride Along” last January.

“You can dominate the marketplace if you have the courage of conviction, but you have to slot it right and have a filmmaker willing to go there with you. We had that in Mr. Eastwood.”

The director’s relationship with Warner Bros. goes all the way back to 1971, when Eastwood and the studio were making moviegoers’ days with “Dirty Harry.” Twenty-eight films and four Academy Awards later, they’re still partners, and “American Sniper” could well add to the Oscar list.

Hollywood plays its version of “The Imitation Game” very well, so it’s likely that you’ll see more mainstream movies with hyper-tight budgets soon. And don’t be surprised if the best of them open in January.