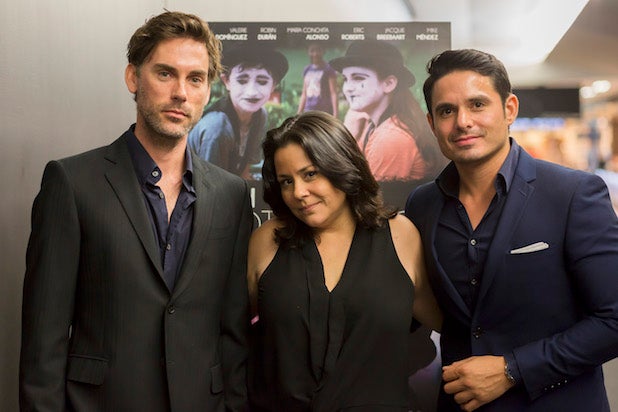 "Beyond Brotherhood" Q&A with Director/Writer Arianne Benedetti and actors Drew Fuller & Robin Duran.hosted by the Wrap at the Landmark Theatre in Los Angeles/Ted Soqui

When you work in Panama, you’re on “island time.” That’s how it felt for American actor Drew Fuller on the set of “Beyond Brotherhood,” Panama’s submission for this year’s Foreign Language Oscar race. Shooting started at 8 a.m., and as he described it, everyone would show up by 8:30 or 9.

“We put a lot of passion into what we do, but we do it at our pace,” said director Arianne Benedetti, who joined Fuller at TheWrap’s Awards and Foreign Screening Series at the Landmark Theatres in Los Angeles on Wednesday.

Fittingly, Benedetti spent 15 years trying to get “Beyond Brotherhood” made. The film is one of just eight Panamanian movies that opened in the country this year, she said. A modest total to be sure, but a big step up from just one native film as recently as seven years ago.

“It’s different in Latin America. It’s an industry that is now waking up to the possibility of actually making films, getting the money and getting the funds, the government and private investors to realize this is something that can happen,” Benedetti told TheWrap CEO and Editor-in-Chief Sharon Waxman, who moderated the discussion. “We only have 3 million people there, it’s a very small country. And it’s an industry that is growing, and that’s why we are here.”

“Beyond Brotherhood” is a story about two children whose parents are killed in an accident and are separated into different orphanages and foster families. Unable to stay apart, they escape from their homes and live together on the street, finding mentors and becoming street performers to get by.

The film is brimming with Panama’s local color, and Benedetti said that the Panamanian government isn’t averse to separating kids should they get caught in this situation. But “Beyond Brotherhood” is a story that could happen anywhere.

“We all have kids, we all have family. I don’t know if we think, what’s going to happen when we die? Do I have my kids covered? Who’s going to look over them?”

But her passion and dedication has paid off. Benedetti said “Beyond Brotherhood” has spent eight weeks in Panamanian theaters and is the second most watched film in the country’s history.

In honor of Julia Roberts' 50th birthday, TheWrap takes a look at her evolution from just the "girl with the big smile" to one of the most respected and highly paid actors in Hollywood.