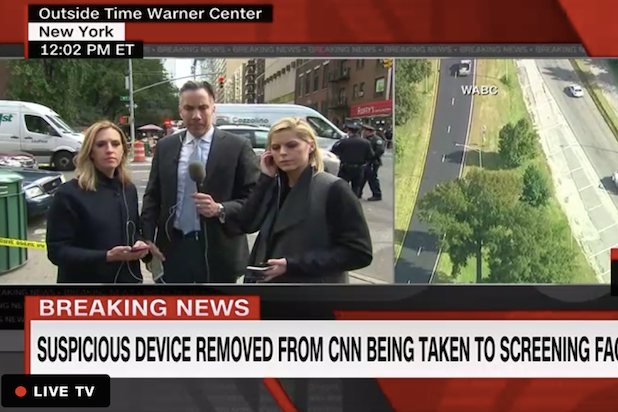 Shortly after 10 a.m. ET on Wednesday, CNN evacuated its staff from its New York headquarters after a suspected pipe bomb was delivered to the building. The device came in a parcel along with a still-unidentified white powder and was addressed to former CIA director (and MSNBC contributor) John Brennan.

Over the next several hours, CNN managed to remain on the air as the network’s live feed jumped between anchors in Washington, D.C., and New York City — with Big Apple reporters doing the bulk of their work from phones and hot-spot connections on Manhattan city streets.

“We always have a studio that is ready to go on air at any moment,” a CNN insider familiar with logistics at the company told TheWrap. (A rep for the network declined to comment for this story.)

“It wasn’t just about staying on the air, we had to get the news,” the insider added, noting that there were multiple suspicious packages sent to prominent Democrats like Hillary Clinton, Barack Obama and Rep. Maxine Waters. “It wasn’t just keeping CNN anchors on, but getting the whole story reported out.”

By late afternoon, CNN employees had returned to the Time Warner Center and New York primetime coverage is expected to proceed from its studios there as scheduled.

The quick resumption of normality was far from assured earlier in the day, when CNN anchors Poppy Harlow and Jim Sciutto rushed off air around 10:10 a.m. after a fire alarm cleared the building.

“There’s a fire alarm here,” they said in unison as an alarm blared through CNN’s sleek Time Warner offices. “We’re going to find out what the latest is here. We’ll be right back.”

There was however no “here” to come back to as CNN staffers from anchors to interns cleared out of the building to safety.

“I was among the first out,” another network staffer said. “We loitered a moment. I took some photos. A cop asked if I was going to put them on Facebook sarcastically, but his tone made me rethink standing around so I ran across the street.”

As employees learned that an explosive device had been found and this was not just a drill, the tone shifted. “Everyone stayed calm but serious,” the staffer said.

Also Read: Trump Vows to 'Get to the Bottom' of Suspicious Packages, Says 'Political Violence' Has No Place

During an unusually lengthy commercial break, the insider said, CNN’s Atlanta-based control and production team quickly replaced Harlow and Sciutto with Rene Marsh, anchoring from Washington, D.C., who broke the news of her own network’s mass evacuation.

“We are following some developing breaking news,” she said. “We can tell you at this hour the Time Warner building in New York City has been evacuated, Jim and Poppy Harlow, who you saw anchoring, they had to evacuate the studio.”

As of Wednesday afternoon, CNN was brimming with visible anger and a prevailing feeling that President Trump — and his repeated attacks against news organizations — had emboldened individuals to mount a potentially violent assault on outlets like CNN.

“There is a total and complete lack of understand at the White House about the seriousness of their continued attacks on the media,” CNN boss Jeff Zucker said in a statement late Wednesday. “The President, and especially the White House Press Secretary, should understand their words matter. Thus far, they have shown no comprehension of that.”

Also Read: Hillary Clinton Calls for Electing Candidates Who Will 'Bring Our Country Together' After Bomb Scare

President Trump and Press Secretary Sarah Sanders did move swiftly on Wednesday to condemn the attacks as the Secret Service and other federal agencies continued their investigation.

“Threats or acts of political violence have no place in the United States of America,” the president said during an unrelated bill signing. “This egregious conduct is abhorrent to everything we hold dear and sacred as Americans.”