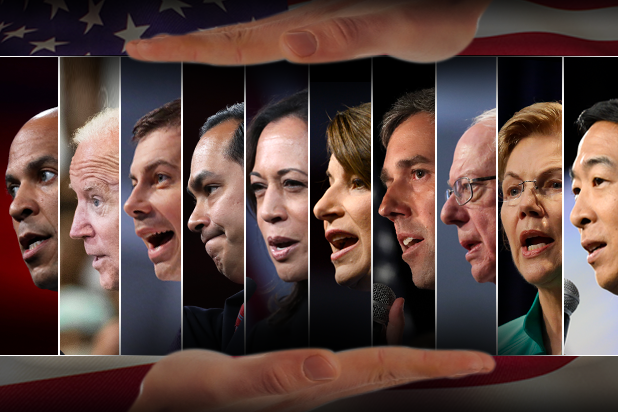 When Abraham Lincoln and Stephen Douglas went head-to-head in a series of seven senatorial debates in 1858, each man was given an hour for an opening, followed by the other candidate speaking for 90 minutes, then the first candidate rebutting for 30 minutes — totaling over 20 hours — to passionately debate slavery in America.

Next week, when 10 of the Democratic presidential candidates meet in Houston for a third round of televised debates, they will never get more than 75 seconds at a time to address the pressing issues of our time.

Naturally, politics and political debate have changed in the 161 years since. But for seasoned debate coaches who spoke with TheWrap, this year’s Democratic presidential debates have seemingly valued soundbites over substance, as moderators have swung from topic to topic with surface-level breadth, and candidates have been left cramming in responses down to the very last second.

It’s a case of competing needs: How do the networks create an interesting and engaging TV event while also providing the space and scope for candidates to demonstrate how they’d think through issues, explain what they would do as president, and argue why they are the best choice for the job?

Spokespersons for CNN and MSNBC did not respond to a request for comment. But after CNN hosted its second night of debates, CNN’s Washington bureau chief, Sam Feist, told The Associated Press, “If we were doing the debate again tomorrow, we would do it exactly the same way.”

The major networks have tried to give audiences more time with specific candidates through televised town halls, where candidates answer audience questions about a single topic in a more intimate setting than the debates.

But town halls also have a downside: CNN’s back-to-back climate change town halls, for example, ran over seven hours on Wednesday, and the format doesn’t expose viewers to as many candidates at once.  And, since there’s no debate, viewers can’t see candidates interact with each other in real time.

Debate coaches’ main issue with the recent Democratic debates, which are backed by the Democratic National Committee, is the amount of speaking time given to each candidate: 60 seconds per answer for the first two rounds of debates and 75 seconds for the upcoming ABC debate. One reason for the clipped responses is the number of candidates onstage.

Ed Lee, the senior director of the Barkley Forum for Debate, Deliberation, and Dialogue at Emory University, acknowledged that Twitterized attention spans have necessitated keeping the debates within a reasonable time frame. But he said that longer speaking-time allotments would better serve the public.

“We’re not pursuing the best mode of political communication and debate, but the most efficient way that fits the news cycle and what they want and what they need. Those are very different from what I think the public needs to make a coherent decision,” Lee said. “A debate with 10 people is not very useful unless you can allocate them sufficient amount of time.”

With more speaking time, debate coaches said, candidates would be forced to push past surface-level talking points and demonstrate how they make decisions, implement policies, and think through complex problems.

Shunta Jordan, the chair of the executive board for the National Debate Coaches Association and head debate coach at the University of Georgia, suggested that candidates receive at least 90 seconds to respond to questions. Lee and Paul Hayes, the director of debate at George Washington University, both said they would want candidates to have at least five or six minutes of response time. In Houston, they will be allotted just 75 seconds.

The debate coaches also wished moderators would be more selective with the number and types of topics they raise during the debate, allowing candidates to get more into the specifics of their plans, and would avoid leading questions designed to pit specific candidates against each other.

In CNN’s debate in July, for example, moderator Dana Bash raised a question that prompted what has since been described as a “rematch” between Kamala Harris and Joe Biden, who clashed over federal busing policies and school segregation at the June debate.

“Senator Harris, this week you released a new health care plan which would preserve private insurance and take 10 years to phase in. Vice President Biden’s campaign calls your plan, quote, ‘a have-it-every-which-way approach’ and says it’s just part of a confusing pattern of equivocating about your health care stance,” Bash said. “What do you say to that?”

Also Read: Colbert Checks in on Trump After the Democratic Debates (Video)

That same evening, Jake Tapper posed this question to Biden: “Mr. Vice President, Senator Booker called your new criminal justice reform plan ‘an inadequate solution to what is a raging crisis in our country.’ Why is Senator Booker wrong?”

The coaches who spoke with TheWrap acknowledged that candidates should disagree during debates, but suggested that questions probing into disagreements should be productive, not incendiary. Hayes said that moderators should make sure the debates go beyond “candidates expressing the same things you can hear in their stump speeches on YouTube” and should instead force them to “walk down the path of reasoning, going through the arguments and evidence for or against their different positions.”

Jordan said candidates and viewers would both benefit from questions that are simpler and to the point. “If they were to ask, ‘Hey, you know, student loan debt has been a large focus for a lot of candidates and millions of Americans have student loan debt. What is your plan for eradicating student loan debt?,’ that’s a lot easier than some of the jargon that some of the moderators use,” Jordan said. “Keeping it simple always helps even the people that are not into politics … follow along and know what’s going on.”

Other options could include having candidates respond in writing to questions before the debate takes place, so that the moderators could draw out clear policy-based disagreements or better pose hypothetical situations to candidates.

Still, the debate coaches who spoke with TheWrap acknowledged the limitations of their craft when it comes to the presidential election. Though primary debates give lesser-known candidates a chance to reach a larger audience and may dictate the future of a campaign, Hayes said that presidential debates rarely impact the election results.

Also Read: 'I Wrote the Damn Bill': Bernie Sanders Shuts Down Tim Ryan During #DemDebate on Medicare for All (Video)

“The bumps that come out of presidential election debates are almost always temporary, and that’s usually because people show up to these debates to cheerlead, as opposed to being persuaded,” Hayes said. “Even those who are open to persuasion are unlikely to find the debates an important enough factor to sway their final decision.”

Perhaps the best recent example can be seen in the matchup between Hillary Clinton and Donald Trump, where the latter’s blustering performance, heavily reliant on false statements and interruptions, didn’t prevent his election. In light of Trump’s presidency and the twisting and ignoring of seemingly basic truths and facts that has pervaded political discourse, debate coaches have also begun to rethink the mechanisms of persuasion and the role of ideological debate in our society.

“Certainly, traditional approaches to logic and evidence, are invaluable skills, and important to train. But we have to admit that that is not enough, that expressing your position clearly and persuasively is also a very important part of it,” Hayes said. “Sometimes, the person who was clear and persuasive may not be the person who has the best arguments and evidence.”

Hayes said students of debate must be trained for the realities of the environment they’re going into, “not the one that we wish they were going into or that we have sort of this idealized notion of.”