Sunao Katabuchi pulled a book out of his bag and held it up to the audience at a recent screening of his film “In This Corner of the World.” It was ratty, folded and in pieces, because for six years, he took diligent notes and was painstakingly accurate in recreating 1940s Hiroshima before the atomic bomb dropped.

Katabuchi interviewed Japanese survivors kept out of the city, all of whom are now in their eighties. He got a glimpse of how people in Japan lived in the months leading up to that fateful day. Katabuchi wanted to know what parks children played at, what buildings were there, what the exact weather was like on a given day and even went into meticulous, horrific detail in imagining how shattered glass from the A-bomb’s explosion could impale a mother protecting her child.

“There’s many things one can never express in any shape or form what happened underneath Ground Zero. So that part was not easy, but those people did exist,” Katabuchi said via a translator to TheWrap’s Matt Donnelly as part of the Awards and Foreign Screening Series at the Landmark Theatres in Los Angeles on Thursday. But Katabuchi described “In This Corner of the World” as less of a film and more of a “time machine.”

Also Read: 'In This Corner of the World' Review: Haunting Anime Character Study Set in WWII

As a Japanese anime, Katabuchi expected to reach a younger audience, even though he knew the film was for an older crowd. But he found that those kids were also taking their parents and grandparents to see the film’s beautiful, slice-of-life portrait of wartime Japan.

“When these 70, 80-year-old folks come to the film, they’re laughing the most, because there are things in the film that only they would understand,” Katabuchi said, describing one scene in which the main character struggles to appropriately cut the fabric for a kimono.

“In This Corner of the World” follows Suzu, a girl from Hiroshima who marries into a family in the mountain town of Kure. It examines the day-by-day struggles of an ordinary housewife and plays like a diary full of sketches that hint at a rich history and culture before Hiroshima was ravaged. The scattershot vignettes and the emotions that range from light hearted to devastating recall other Japanese classics depicting wartime like “Grave of the Fireflies” and “The Wind Rises.”

Also Read: 'The Wind Rises' Director Hayao Miyazaki Goes Out in a Blaze of Controversy - and Beauty

Originally, Katabuchi worked independently on his film with just his wife and one employee. Thinking it was a tough subject to sell, he found himself turning to crowdfunding as a means to get his story out.

“I switched over to Suzu’s wartime cooking habits,” Katabuchi joked about his initial lack of funds. “It was the audience who already knew this was something special.”

Katabuchi’s diligent efforts have been rewarded. “In This Corner of the World” has played in Japanese theaters for over a full year. Like Katabuchi did with the manga on which his film is based, he estimates more than two million people have come to soak in the film’s richly imagined world.

“I really intent to keep this by my bedside, by my pillow, because I keep rediscovering new things about it, so it’s really something I plan to keep for the rest of my life,” Katabuchi said about his tattered source material he keeps in his bag. “I felt that this really just lays out one person’s life. Not just treating it as a story and drawings on a page, but I felt this was a real person and it’s someone I wanted to spend time with.” 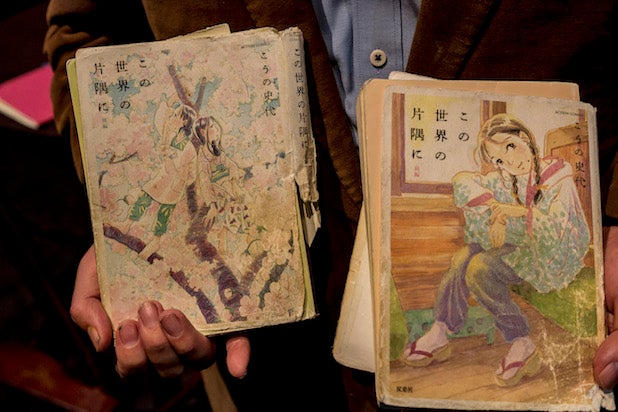