When Eddie George was catching touchdown passes and breaking rushing and receiving records for the Tennessee Titans, no one expected that one day he would be singing and dancing his way through musical theater.

But that is exactly what the Heisman Trophy winner and four-time NFL Pro Bowler is doing this week, when he stars in “Chicago” at the Hollywood Pantages Theatre as charming lawyer Billy Flynn, opposite Grammy winner Brandy Norwood as Roxie Hart.

The 42-year-old former running back (who retired from football in 2004) is reprising the role from his Broadway debut earlier this year, after previously taking on the title roles in Shakespeare’s “Othello” and “Julius Caesar” at the Nashville Shakespeare Festival.

While many retired athletes turn to on-air sports commentary and reality TV (George has done both of those!) or make a cameo appearance opposite Dwayne “The Rock” Johnson (he’s done that too, in “ Plan”), not many head to the stage.

“After I finished playing, I wondered what I was going to do next in my life — it was exciting but scary, and there was a lot of doubt,” George told TheWrap.

“I went through depression and mourning and was searching for a career that was equal to playing football.”

In an effort to feel comfortable in front of the camera for his gigs as a football analyst, George took acting lessons and fell in love with performing in live theater. “I have been studying for 10 years, and it was three years before I even dared perform on stage.

“The hardest part was not being distracted by the bright lights and stage fright — and to deliver someone else’s words. I needed to learn to communicate the material and be confident in my body,” he explained.

“I figured that if I wanted to do it, I wanted to be taken seriously, and the actor’s medium is the theater. All the top actors have a stage background, such as Meryl Streep, Morgan Freeman and Al Pacino.”

So the Ohio State alum from Philadelphia started reading Shakespeare with his acting coach, going over the sonnets, breaking down the text and learning iambic pentameters like an NFL playbook.

George’s ultimate inspiration to take on the Bard came from an unlikely source. “I went to see Jude Law in ‘Hamlet’ on Broadway in 2009. The way he brought the character to life was so compelling, the delivery brought the role to life and made it so believable — he was tormented one minute and elated another. It was magical.

“I had never been to an Shakespeare play before and thought I would be bored out of my mind, but I was entranced,” George marveled. 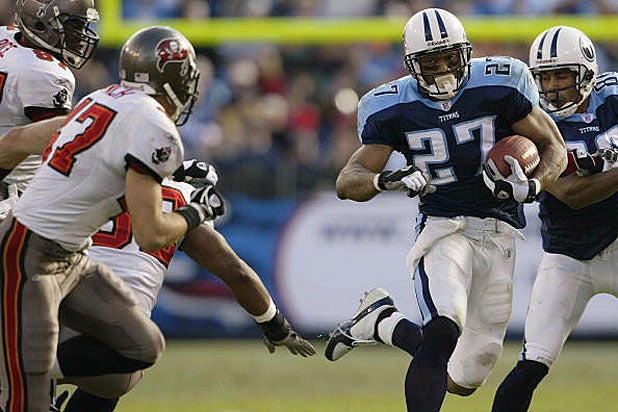 Former Houston Oilers and Tennessee Titans teammates were surprised that George went into theater, to say the least, but now they think it is cool. “The stage is my place of peace, I love performing. You really are entertaining people [playing football] on Sundays, so you learn communicate to people,” he explained.

And while “the money in theater is not comparable to sports or film, the gratification from it is amazing. Everyone is putting forward their maximum effort to tell the story.”

After his run on “Chicago” through this Sunday, May 1, George has auditions coming up for another Broadway play. But now that there’s a spot available on “Live!” next to Kelly Ripa — would he be interested in stepping into fellow NFL alum Michael Strahan‘s (very large) shoes?

“I would be open to morning TV if it was the right opportunity, but I still want to continue to do Broadway. I wouldn’t mind guest hosting ‘Live’ once in a while,” he said.

“Michael was so perfect for the job. It is tough to create that and it has to be organic.”

For more details on “Chicago” at the Pantages Theatre, click here.