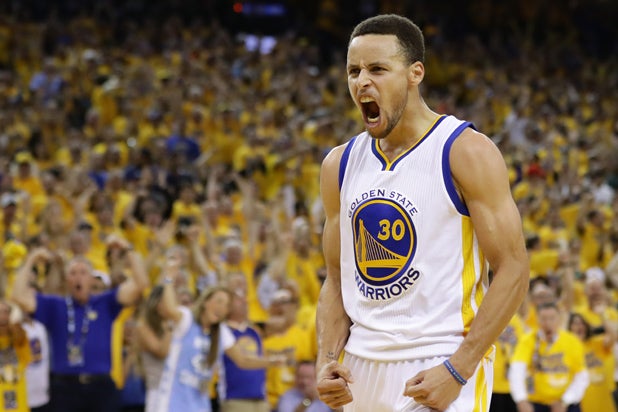 As Stephen Curry and the Golden State Warriors attempt to sweep the NBA Western Conference Finals on Monday night, the director of Curry’s new Facebook Watch series “Stephen vs. the Game” is hoping to score a Sports Emmy win at the 40th awards ceremony in New York City.

Gotham Chopra and his Religion of Sports team have been nominated for four Sports Emmys for their prior series, “Tom vs. Time” and “Shut Up and Dribble.”

Their latest Versus on Watch documentary delivers unique insight into the personal and professional life of three-time NBA champion and reigning Finals MVP Curry, who has recently taken inspiration from another sports legend — Tom Brady.

“One of the greatest things about ‘Tom vs. Time’ is that it became this bible for a lot of athletes. Steph — especially now in the playoffs — tells me how he is watching it and he picks up these little pearls of wisdom from Tom as motivation,” Chopra told TheWrap.

With nine championship rings between them, Brady and Curry are among the greatest players ever in their respective sports, and the pair have more in common than being subjects of the Facebook Watch anthology series despite their age and cultural differences.

“Tom is a 42-year-old white guy from Northern California. Steph is a 31-year-old black guy from the south,” Chopra said. “Over 10 years is actually a big age difference when you think of social media, pop culture and all of that stuff so the things Steph surrounds himself with and the music he listens to are very different to Tom. But when you get down to the devotion to their craft and the ‘I was born to do this’ dedication, that is where you see a lot of similarities between them.”

TheWrap caught up with Chopra ahead of the Sports Emmys to talk “Tom vs. Time,” “Stephen vs. the Game” and an obscure Death Match wrestler named Cannonball, who gets hit in the face with cheese graters.

TheWrap: Was “Stephen vs. the Game” a natural progression for the Facebook Watch series?
Gotham Chopra: Working with Facebook is super fun, and while it is one of the biggest media companies in the world, “Tom vs. Time” was one of the first pieces of long-term content that they’d partnered on. The autonomy we were given made it a great experience, and we’ve had the same sort of ride with “Stephen vs. the Game.”

We’ve talked about the similarities between the two, but how does Curry’s mindset differ to that of Brady?
One of the biggest differences is that although Tom has publicly talked about playing into his mid 40s, he is still closer to the end of his career than the beginning, so there is an evaluation of his legacy and body of work as everyone tries to understand what this will mean in the context of sports history.

While Steph is 10 years in and trying for a fourth championship, he is still in the middle of his career. He doesn’t think too much about legacy or what his place is in the history of the game. He is just very focused on the here and now. Every time I ask him a question of legacy, he just stares at me blankly — he is not in that place and doesn’t think about it.

Despite their huge sporting success, both Tom and Steph are great family guys, which is a side of them we don’t often get to see.
I feel like there is old adage that athletes or people who attain greatness are so focused on their craft that it impacts the rest of their lives — that their relationships aren’t great, their marriages are flawed, they have problems with their parents or kids. Tom and Steph are examples of the opposite. They need balance, tranquility and strong foundations in their lives. They’ve both had that with their parents and siblings growing up, and that’s part of their success on the field and the court. I’ve gotten to see it a lot with Steph the past year. When he is dropping the kids at school or spending time with them, he is not checking his phone and not thinking about basketball. He is focused on being a dad, which is very important to him. When he is at home, he needs to be present so that when he goes to play, he can be present there.

As a father yourself, was that important to you when picking who was going to be the subject of the second series?
They play for two teams that are competitive at the highest level and they’re both great guys with strong families, and easy to work with so that was definitely attractive. While I am huge sports fan, sports is the backdrop to the series and these are well-rounded people who not only want to succeed at the highest level, but they want to contribute and for their jobs to mean something. It is relatable for me, as I’m fortunate to be close with my family as well.

Is there anything you learned about Steph that truly surprised you while making the series?
Steph is the real deal, most people think he is a good guy and have heard about his faith … he’s genuinely that guy and is very put together. When you watch him play, you would think he is like a robot because there is this effortlessness on the court, his game is like a ballet. But then you go to his house … Steph and Ayesha have three little girls, their parents are around — it is chaos, controlled chaos, but still chaos!

What is next for the series, will there be another season of “Steph vs. the Game” or will you focus on a different athlete?
We have a great partnership with Facebook and this is essentially a franchise at this point … we will wait to find the right athlete and when we do, we’ll go for it. Facebook looks at who is already on their platform, who has huge followings, who is really engaged in their communities. Then the question of “are they the best of the best?” We set the bar high with Tom and Steph so it needs to be someone in that sports and cultural cachet. Meanwhile, we have all our other Religion of Sports shows and the “Why Sports Matter” podcast, so there is plenty for me to do once this one is put to bed.

You cover a juxtaposition of athletes who are at the top of their game and then others no one has ever heard of, which interests you the most?
I can’t say that I love one more than the other, as they are very different. Obviously, working with Tom and Steph, the challenge is that you’re covering people who are so visible so you have to find ways to reimagine their story or showcase them in a way that the audience doesn’t already know.

Then on the flip-side, for the Religion of Sports shows we focus on obscure athletes and sports that don’t have that instant curiosity factor but you get a lot of access as they want to tell their stories. Once you get past the absurdity and craziness, underneath it all is an irrational passion for sports, performance and authenticity. On the face of it, you can’t think of anything more opposite than superstar Tom Brady and totally obscure Jeff “Cannonball” Guerriero [a Death Match wrestler featured on the “Why Sports Matter” podcast], but underneath there are a lot of similarities.

“Tom vs. Time” and “Shut Up and Dribble” are both nominated for Sports Emmy Awards, how important is that kind of recognition to you?
It is not necessarily the motivator but it’s great affirmation, especially if you look at the nomination categories for “Shut Up and Dribble” (open/tease, editing and promo announcement). It is recognition that it takes a village to produce these shows and gives me pride that people on our team are being recognized for their work.

On “Shut Up and Dribble,” we’re talking about politics and social issues, which are my other great passions, so it is the convergence of all of that. It is a special project but not an easy one in a lot of ways — it took a lot of time and we had a lot of moving parts especially as things in the political sphere evolved while we were making the series, so we had to keep up with them and deliver the right messages. But I am really happy with how it all came out.

Follow the Sports Emmy Awards live on Twitter Monday night from 7 p.m. ET and watch Versus on Watch series “Stephen vs. the Game” here.