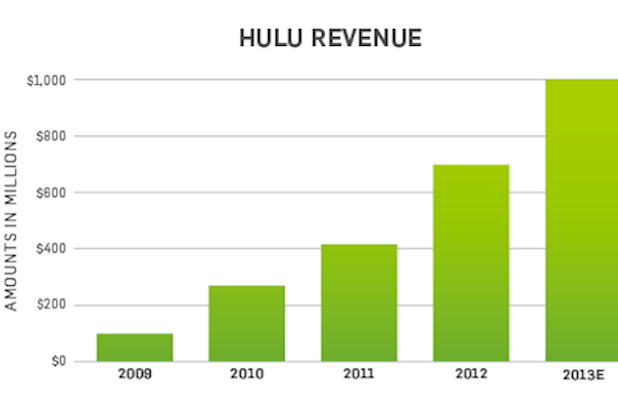 Hulu will generate $1 billion in revenue in 2013, CEO Mike Hopkins wrote in a blog post Wednesday titled “A Strong 2013.” Hopkins took over the company in October from Andy Forssell, who had been serving as interim CEO since Jason Kilar resigned in January.

Hulu generated $695 million in revenue during 2012, so revenue climbed more than 40 percent year-over-year. That is the slowest Hulu’s revenue has grown since it began reporting revenue. (Graph with Hulu’s revenue at the top of this post.)

The company also passed a milestone on the subscribers side. Hulu Plus, the pay subscription service offerings a wider array of shows, now boasts more than five million subscribers. Growth is slowing there as well, though the service still grew its base by more than 50 percent year-over-year.

Half of those subscribers are streaming TV and movies exclusively using devices like Xbox One, PlayStation4, Chromecast, smartphones and tablets.

Hulu has had a fitful year. It began with the departure of its CEO, a long-rumored move that robbed Hulu of its founder. Then owners Disney and Fox spent months attempting to sell the company, deciding at the very last minute they would keep it and give it one more chance.

The two owners have often disagreed over what Hulu should be, and how many of their show currently on-air should appear on the service immediately.

However, Hulu also progressed in several ways, growing its library of shows to more than 86,000 episodes of TV and moving into offering original content — shows viewers could only find by using Hulu. Hulu launched more than 20 “originals” in 2013, three of which — “The Awesomes, “Behind the Mask” and “The Wrong Mans” — were among Hulu’s 10 most-watched shows each week a new episode aired.

Hulu will double its number of originals in future years, an area where it will compete with Netflix, Amazon and other companies distributing high-quality shows online first. Hulu has hired new staffers as it expands into new businesses, growing its staf to 725 people.

To support that continued growth, Hulu will need to sustain growth in revenue, and continue to hone its programming strategy.

“It’s exciting for me to see the continued growth of the business and be part of such a great team,” Hopkins wrote. “As we scale the business in 2014, we will continue to invest in content, technology and people. 2014 will bring even more opportunity as we find new ways to grow the business from the strong foundation we have built.”