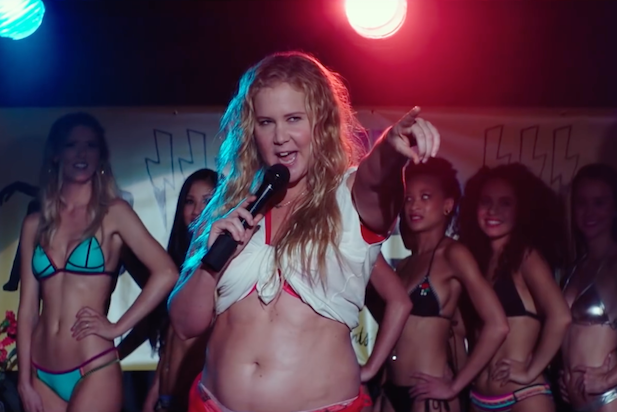 Amy Schumer’s new comedy “I Feel Pretty” is on track for a disappointing third-place finish in its debut this weekend — a marked decline in the comedian’s fortunes at the box office.

Three years ago, Schumer left a big mark on the box office with her debut film “Trainwreck,” which opened to $30 million and went on to gross $140.7 million worldwide. But last year’s sophomore effort, “Snatched,” flopped in the shadow of “Guardians of the Galaxy Vol. 2,” opening to $19.5 million and only grossing $60.8 million globally.

“I Feel Pretty,” which stars Schumer as a woman who is knocked out while trying to lose weight and wakes up with a completely new perspective about her body, is opening in 3,400 locations. Unlike Schumer’s previous films, “I Feel Pretty” is rated PG-13 instead of R. This could help the film — the directorial debut of Abby Kohn and Marc Silverstein — find a wider audience in coming weeks.

Also Read: Amy Schumer Claps Back at 'I Feel Pretty' Critics: 'We All Struggle With Self-Esteem'

Analysts who spoke with TheWrap say that Paramount’s “A Quiet Place” and New Line’s “Rampage” will once again contend for the No. 1 spot, with the edge being given to “A Quiet Place” after it held its second-weekend drop-off to 34 percent.

This weekend’s list of wide releases consists of two other films that are all expected to open to under $20 million.

Fox Searchlight’s “Super Troopers 2,” the sequel to the cult comedy by Jay Chandrasekhar. It was released in February 2002 and opened to $6.2 million — $9.8 million in today’s dollars — and the sequel is expected to open to $8-9 million this weekend.

The film is written by and stars the Broken Lizard comedy team, which includes Chandrasekhar, Kevin Heffernan, Steve Lemme, Paul Soter and Erik Stolhanske as a group of bumbling Vermont State Troopers. When a border dispute arises between the U.S. and Canada, the group sets up an outpost in the disputed land, and their arrival isn’t welcomed by the Canadians. Brian Cox, Seann William Scott, Lynda Carter, and Rob Lowe also star.

Finally, there’s Codeblack/Lionsgate’s “Traffik,” a thriller written and directed by Deon Taylor that stars Paula Patton as a journalist whose romantic getaway with her boyfriend is shattered after they accidentally come into possession of a phone belonging to a group of sex traffickers. Lionsgate is giving the film a targeted release of around 1,000 screens with a projected opening of $4 million.

With Marvel’s “Avengers: Infinity War” a week away, most studios are giving this weekend a wide berth. No studio wants to put out a major release this weekend only to have moviegoers ignore it next week in favor of the most anticipated film of the year.

In fact, Warner Bros. moved “Rampage” up to last week after “Avengers” was bumped from May 4 to April 27.