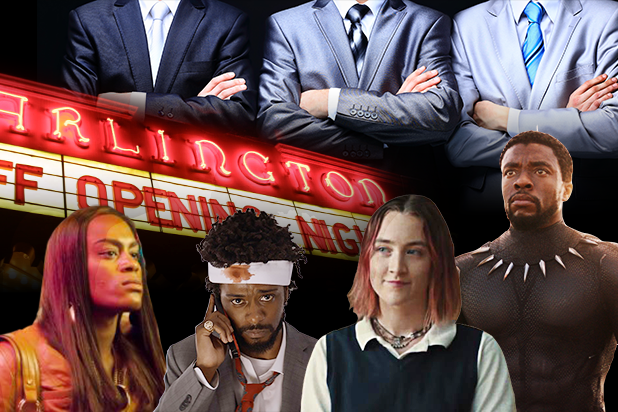 In her four years in film distribution, Alece Oxendine has grown accustomed to being the lone person of color in the room.

“Distribution is the last frontier of filmmaking,” Oxendine said. “Everyone is having these wonderful conversations about elevating more women filmmakers and filmmakers of color and helping them out in so many different ways, but the challenge is they are not being met with the support they need once the film is completed.”

In conversations with TheWrap, Oxendine and other insiders said that buyers from distribution companies are predominantly white and male — which they said inhibits their ability to champion diverse content and understand the commercial appeal of a film targeted to nonwhite audiences.

“The folks who are in charge of ensuring what gets greenlit, what gets bought, what gets elevated in terms of the types of theaters it gets into, and promotion and marketing that gets behind some of these products… it’s just not representative of the marketplace,” Rashad Robinson, the director of the civil rights nonprofit Color of Change, told TheWrap.

Hollywood continues to find itself under fire over lack of diversity, both in front of and behind the camera. A UCLA study found that whites held 78 percent of the onscreen roles in the top 200 theatrical releases of 2016. More tellingly, just 12.6 percent of those films were directed by people of color and only 6.9 percent by women.

And although there are no statistics about the gender and racial makeup at film distribution companies, industry insiders raised concerns about how a lack of diversity among decision-makers can impact what’s seen on screen.

The push for more onscreen representation in recent years hasn’t translated to a major push for diversity in executive suites, many insiders said.

“The conversation was largely about the Oscars being so white, but there was very little buzz about distributors being so white,” said Ezra Ezzard, an African American industry veteran and the founder of Artification LLC, which provides distribution strategy to filmmakers. “There’s not a lack of films that feature people of color, there’s just a shortage of distribution opportunities for our stories.”

When Darius Clark Monroe screened his biographical feature documentary “Evolution of a Criminal” at festivals in 2014, winning the prestigious Grand Jury Prize at the Full Frame Documentary Film Festival, he said he received warm praise from the buyers and distributors. But when he met with those same people to talk about making a deal, he was told that the work — which tells the story of Monroe and his family, who are black — would not be able to find an audience.

“We submitted the film to essentially everyone. It’s funny to be told repeatedly by white male after white male that there’s really no market for the work or there’s no audience for the work,” said Monroe. “And I guess it’s not a difficult equation to come to terms with when you have [distributors] who don’t come from my background and who are essentially gatekeepers and are in charge of what is being introduced to the market. They don’t know how to market to the audience you’re trying to sell to.”

Efuru Flowers, who worked in film acquisitions at Paramount before spending years as an industry liaison and event specialist at the American Film Institute, said that she was frequently told that black films don’t sell internationally — despite the overseas box office success for recent studio hits like “Hidden Figures,” “Get Out” and “Black Panther.”

The challenge is even greater for indies without a studio’s backing. “Many of these films were being made, but not being seen by buyers at large,” Flowers said. She believed that black films would sell in the global marketplace if there was more representation in the sales sphere, and worked towards filling this hole in the marketplace by starting her own sales agency, Flourishing Films, which focuses on representing black and diverse content.

Themba Bhebhe, who worked in sales at Pathé International prior to joining Flourishing Films, pointed to Barry Jenkins’ “Moonlight” as an example of a black film that defied expectations and did well overseas. The surprise Oscar Best Picture winner earned $37.2 million overseas — more than the $27.9 million it made in North America, according to Box Office Mojo.

Also Read: 'Guardians of the Galaxy' Cast Asks for James Gunn to Be 'Reinstated' as Director

Along with Flourishing Films, there are several independent distribution companies that seek out diverse content, including Array Now, the grassroots distribution company started by “Selma” director Ava DuVernay. “There’s a generation of filmmakers of color and women whose primary concern is that no one will see their work,” DuVernay told the Los Angeles Times in 2015. “And that is a huge barrier. They’re asking, ‘Why make something if no one will see it?'”

For smaller indie distributors like The Orchard that don’t have the budget to develop films from the script stage, festivals like Sundance and Toronto are a crucial source of content. “A lot of the onus is on them, simply because that’s where we go to buy our films,” said Danielle DiGiacomo, the vice president of acquisitions at The Orchard, which recently released “Kings,” a drama from Turkish director Deniz Gamze Ergüven starring Halle Berry, and “We the Animals,” a coming-of-age story about a Puerto Rican boy.

“These programs are responsible for creating a marketplace that’s diverse, and representing a lot of different filmmakers and voices,” she said. “I would generally like film festivals to take more risks.”

Many of the larger festivals have worked to implement diversity initiatives in recent years. This year’s Tribeca Film Festival achieved near gender parity among its directors, while the Sundance Institute runs programs that provide support, mentoring and financing for female writers and directors as well as indigenous filmmakers around the globe.

“Inclusion is really based based into everything that we do,” said Karim Ahmad, the director of inclusion at Sundance, adding that the institute’s focus is more artistic than commercial. “We’re there to showcase the artists, not because we’re trying to get them sold, although obviously we want these films to be able to make money and have an audience for the sake of the artist.”

Still, Ahmad noted the lack of diversity among film buyers. “When you have these gatekeepers who are between a filmmaker and an audience and making subjective evaluations about a film and its ability to connect with an audience, that’s going to be really problematic for the filmmaker, and [not getting distributed] can impact their ability to make a living as an artist,” he said.

Bhehbe suggested that the mainstream success of recent films featuring black casts — including several indies — is making room for a gradual shift in distributors’ perception. “Five years ago, if somebody had proposed ‘Moonlight’ or ‘Tangerine’ or ‘Hidden Figures,’ they were always referred to as ‘niche,” he said. “The successes of these films have generated a movement where people see that these films have a larger audience beyond those who are specifically represented in the narrative, and shown that these films can be successful beyond the ‘niche.'”

But those successes often depend on the hard work of teams that are representative of the diverse audiences who are being targeted.

“Sometimes, something comes along where someone did listen and pay attention to the young black coordinator on the team, and you get a release strategy that works, and history is made,” Ezzard said, “it’s not a shock to us because we know what black people want to see and what the buying power is.”