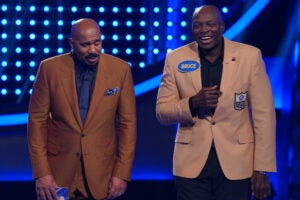 Exclusive deals with Joe Rogan and Kim Kardashian, among others, show Spotify is serious about being known for more than just music

To get there, Spotify is placing big bets on podcasts, a space long dominated by Apple. Over the last few months, Spotify has paid $100 million to land an exclusive deal with Joe Rogan, the biggest name in the industry, and signed Kim Kardashian to host her own criminal justice podcast. It also recently signed an exclusive deal with DC Comics to create shows centered around heroes like Wonder Woman and Batman. And in February, Spotify paid up to $196 million for Bill Simmons’ The Ringer, which features dozens of podcasts, including Simmons’ popular sports and entertainment podcast.

The moves were a clear sign Spotify wants to be known for more than just music. Courtney Holt, global head of studios and video, told TheWrap that Spotify made its bet on Rogan and other exclusive pods after seeing their users clamor for more than just music. “We don’t have Joe Rogan on the service (right now), but it was one of the most searched for and demanded podcasts from our consumers,” Holt said. “So it made sense for us to be able to provide that, and we thought the right way to provide it was to go big, to be in partnership with him and make it exclusive to Spotify.”

Spotify’s users aren’t the only ones who are happy about the Rogan deal. Since it was announced in mid-May, shares in the company have rocketed 56% higher, a sign investors have enthusiastically signed off on the podcast buying spree. Goldman Sachs analyst Heath Terry, in a recent note to clients, said the deals were a smart play by Spotify — even if they cost a pretty penny — considering how large the podcast market has become. (The podcast industry overall is expected to hit $1 billion in revenue by the end of 2021.)

“With 150-plus million Americans having listened to a podcast and 100-plus million having done so in the last month, according to 2020 Edison Research survey, we believe the exclusivity potential in the category creates a meaningful opportunity to differentiate the service in a way that has proven more difficult in recorded music,” Terry said.

That’s what makes these deals especially intriguing to analysts and investors: Spotify’s bid to upend the podcasting status quo. For the most part, the industry has been open to this point, allowing podcasters to share their shows across multiple platforms. Spotify is now working to create a “walled garden,” where fans have to come inside its ecosystem to enjoy the podcasts they love.

Holt said Spotify is primed to take advantage of this opportunity from a business perspective, thanks to its experience with ad-supported music streaming.

“We already have a very robust and scaled advertising business, so it isn’t that we’re starting from scratch,” Holt said. “Podcasting is an ad-supported medium. We feel today it’s undervalued and under-monetized in the portfolio of opportunities for marketers. It’s small [and] it’s growing, compared to radio and online video. It really is an amazing brand opportunity and the key for why we’re making the investments.”

Still, Spotify believes that if it’s going to topple Apple Podcasts as the go-to podcasting platform, it’ll have to set itself apart with more than just exclusive shows. Right now, Apple is responsible for 42.7% of all devices downloading podcasts, according to data shared by Chartable. For comparison, Spotify claims 19.9% of all unique podcast downloaders. In other words: it has plenty of room to make up to catch Apple.

To win over more fans, Spotify has a few tricks up its sleeve, according to one person familiar with its podcasting plans. One feature Spotify plans on releasing is making it easier for fans to toggle back and forth between watching a video stream of a podcast and just listening to the audio feed. So if a Spotify user is watching The Joe Rogan Experience on the bus and gets off, they don’t need to close the video and switch over to their podcast app to continue listening; this is something users run into now if they’re watching Rogan on YouTube and then have to switch to their podcast app-of-choice to pickup the conversation when they’re on the move. Instead, Spotify users will be able to simply hit one button to easily shift from video streaming to audio streaming.

And on the business side, Spotify is working to make its ads more interactive for users. For example, if Spotify users hear an ad read during a podcast they’re listening to, they’ll be able to click on their screen to access discounts and deals mentioned in the ad, according to the person familiar with its podcasting plans.

“Spotify is moving extremely aggressively to acquire content in order to encourage more podcast listeners to use Spotify as their primary app,” Chartable CEO Dave Zohrob said. “The plan is straightforward — get the content, which brings the listeners, which allows Spotify to sell more and better-targeted ads on podcasts. If it works, they’ll become the ‘YouTube of podcasts’ and gather a large share of all ad dollars in this growing market.”

On top of that, Spotify’s deal stockpile is a clear move to cut into Apple’s reign as the top podcasting platform. Apple has already taken notice, it appears, with the tech giant now ramping up its own original podcasting efforts.