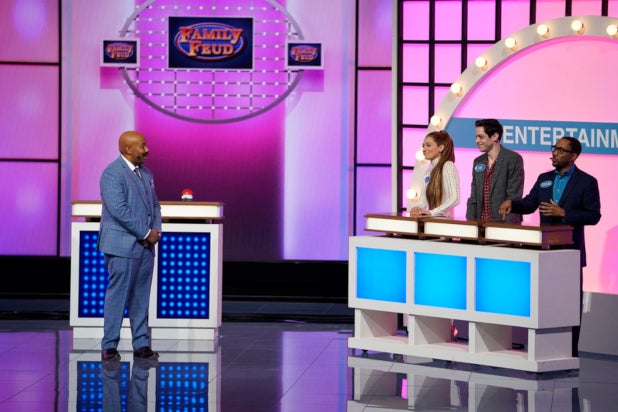 NBCUniversal kicked off broadcast TV’s Upfronts Week 2019 from Radio City Music Hall, as it always does.

Below are eight things TheWrap took away while in attendance.

Find the 2019-20 schedule for the NBC broadcast network here. Readers can check out trailers for its new fall series here.

Rain, Rain Go Away
OK, so looking at the extended forecast here in New York City, this will also apply to Fox’s presentation from the Beacon Theater this afternoon. Monday was a gross, rainy day in Manhattan and the rest of the tri-state area, making getting anywhere a giant pain. Could have been worse, could have been Sunday’s downpour.

Fallon got nowhere, but his buddy John Cena showed up to handle the heavy lifting. Unfortunately, the WWE Superstar threw the heavy hammer way too high, also missing the mark.

Fortunately, there was a little girl there to clean up, simply changing the channel with a voice remote. The TV landed on NBC’s key programming, waking all the brainwashed men and women up.

“This is why girls should be in charge,” the little girl said. That was pretty much NBCU’s ad sales boss Linda Yaccarino’s cue.

“Monday Morning Live”
“SNL” got to work early on an off day as players Kenan Thompson, Alex Moffett, Kate McKinnon, Kyle Mooney, Melissa Villaseñor, Pete Davidson and Chris Redd took the Radio City Music Hall stage to play a little upfronts-themed “Celebrity Family Feud.” Thompson was Steve Harvey, of course — everyone else had an NBCU gig. (The real Harvey is being replaced on NBC’s “Little Big Shots” by Melissa McCarthy for its upcoming season.)

Much of the skit centered on the over-the-top “horniness” of MSNBC “Morning Joe” co-hosts and real-life couple Joe Scarborough and Mika Brzezinski. Redd’s Sterling K. Brown got a lot of laughs in the room as well.

Hey, Kenan’s gotta do the gig — he has a bunch of NBC shows now, including “Saturday Night Live,” “The Kenan Show” and “Bring the Funny.”

We Got Kardashians — Well, Some of Them
Kendall Jenner and Kourtney and Khloe Kardashian made a quick cameo to help plug NBCU’s unscripted series, including their show “Keeping Up with the Kardashians” on E! Lord knows how much time they spend in hair, makeup and wardrobe for what felt like maybe 30 seconds on stage.

Olympics Come Early
NBC doesn’t have an Olympics every year, it just feels that way. A year after trotting out the 2018 Gold Medal-winning U.S. Women’s Hockey Team, NBCUniversal upped the ante to promote next summer’s Games from Tokyo, bringing out 13 Gold Medal-winning female Olympic athletes, including Jackie Joyner-Kersee, Lindsey Vonn and Tara Lipinski. As if their presence and hardware wasn’t moving enough, NBCU brought out a full orchestra to bring us all to tears.

Hey, that $1 billion in ad dollars won’t sell itself.

Also Read: 'This Is Us' Renewed for 3 More Seasons by NBC

Ted Danson Delights
“Cheers” alum and “The Good Place” star Ted Danson came out to break up the new comedy trailers. Appearing on stage after “Zoey’s Extraordinary Playlist,” which stars his wife, Mary Steenburgen, Danson predicted that by the end of the night that he “will sleep with one of the actors on this show.”

Danson then introduced himself as “legendary actor Ted Danson,” but he noted that when an actor hits 70, he automatically gets that moniker. He added that in five years, he’ll become “iconic” and in a decade, “a national treasure.”

“If you all could keep me employed for the next 10 years I’d appreciate that,” Danson said.

Fey and Poehler opened by saying they’re delighted to be back at “The 150th” Golden Globes, before lamenting that it doesn’t appear award shows even need hosts anymore, with the jobs going to “high-end refrigerators” these days. “Good luck getting robots to host shows,” Fey said before Poehler reminded her of USA’s hit drama, “Mr. Robot.” Fey responded it’s “just another example of the diverse talent” on NBC.

The two also referenced their time on “SNL” and sitcoms “30 Rock” and “Parks & Recreation,” with Poehler saying they were welcomed with the network’s “feathery peacock arms” which allows them to reemerge into swans. “And like swans,” Fey added, “We’re mean as hell and we won’t stop pooping… out great stuff for NBC.”