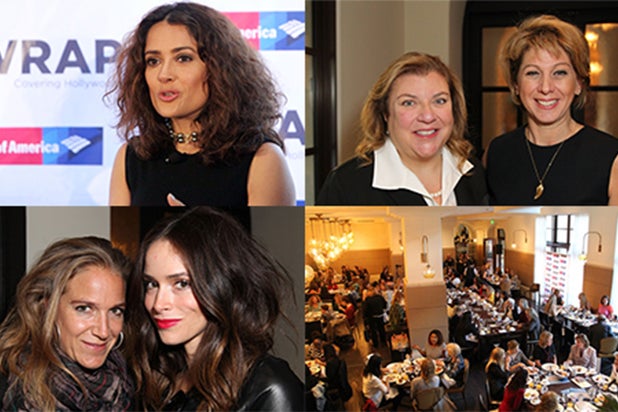 Actor and activist Salma Hayek shared  details of her work on behalf of women on Wednesday, saying she preferred to “live” her activism “instead of talk about it.”

The Oscar-nominated actress spoke emotionally at a packed breakfast for 150 Hollywood women executives on Wednesday, TheWrap’s sixth Power Women Breakfast. She has worked across the globe, from Guatemala to Mexico to India to the African continent, focused mainly on preventing domestic violence.

Although Hayek is often a public face in her activism, “sometimes you do more awareness by being aware of yourself and living in the presence of this awareness than by talking until you die,” she said.

As an example, she said when her husband, billionaire Francois Henri Pinault, saw she gave up a luxury vacation in order to work in the field in South America, he was inspired to launch the Kering Foundation in 2009, against domestic violence.

“The fact that my husband saw what I did, that awareness, not through a pamphlet but through seeing it, inspired him to go out and do something, which became a much bigger thing,” Hayek said.

Berman spoke about becoming a digital entrepreneur after decades of success in Hollywood as the head of Fox Broadcasting and later Paramount. When she cofounded Berman-Braun, the digital production company,  “no one understood what we were talking about.

“I would get scared about it. I didn’t want to sound stupid, but I was stupid,” Berman said. “I had to educate myself and that was hard.”

Damon stunned the audience into silence when she spoke of her work as a Middle East war correspondent.

Letting down her guard, Damon teared up at the recollection of talking to victims of rape in Syria and Iraq who couldn’t protect their children as bombs rattled their homes. She noted that sometimes her job was like “screaming in the dark,” hoping that “maybe something I say will have an impact.”

The journalist recalled an uplifting story of a young boy she met in the region who was horribly scarred when five masked men inexplicably threw gasoline and burned him while he was playing in front of his house. “His little face was a frozen mask,” she recalled. “You could only poke through a grain of rice into his mouth.”

Through her reporting, strangers started to donate to his cause. She described the best day of her career as calling his family and telling them that he was going to America and he was going to get help.

“I didn’t know that much charity from strangers existed,” she said.

The event at the Montage Beverly Hills was the largest since TheWrap launched the Power Women series in 2009, as tables and chairs were added to an overflow crowd.

The event was sponsored by Bank of America and Montage Beverly Hills. An auction to benefit the IWMF included luxury items from Ferragamo, Armani, Rarecat Wines, A Woman’s Palate, Montane Candles and Marron Costello jewelry.