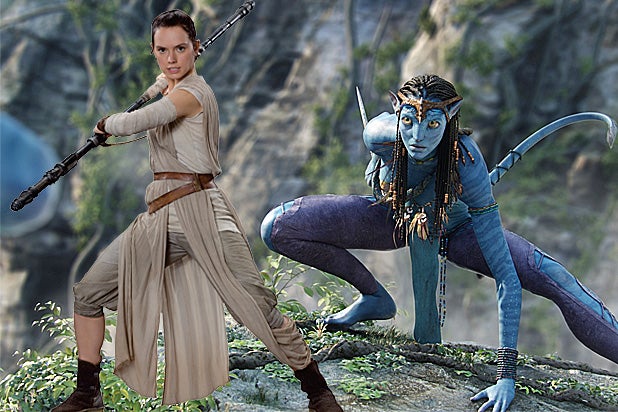 It has been five weeks since its opening and it’s clear now that “Star Wars: The Force Awakens” won’t dethrone “Avatar” as the highest-grossing movie ever at the worldwide box office.

While “The Force Awakens” has shattered records in the U.S. and the U.K. — where it grossed $173 million, topping the $150 million for “Avatar” — it hasn’t connected quite as much in other foreign territories.

Roughly 55 percent of the global grosses of “The Force Awakens” have come from abroad, which is low compared to most modern blockbusters, but in line with earlier “Star Wars” movies. By comparison, nearly 73 percent of the worldwide total for “Avatar” in its initial run and re-release came from foreign markets.

So has the overseas box office performance of “The Force Awakens” been affected by the love-hate relationship with America found in many nations?

For decades, foreign observers have seen “Star Wars” movies as symbolic of modern America. Ewoks were compared to the Viet Cong. The centerpiece of President Reagan’s second term was the “Star Wars” missile defense system and he called the Soviet Union “the Evil Empire.”

“‘Star Wars’ catches both America’s light and dark sides, its naive optimism and its crass, domineering pursuit of profit,” wrote Peter Conrad in the U.K.’s Guardian prior to the debut of “The Force Awakens.”

And while Disney successfully marketed the film in China — it’s earned $114 million in just over two weeks — it was knocked out of the No. 1 spot at the Chinese box office after just one week by a homegrown film, “The Boonie Bears 3.” Moreover, it’s unlikely to pass the $204 million gross of “Avatar” in 2010 for Fox, or the $392 million rung up by Universal’s “Furious 7” in July 2015.

“There’s no question that it was going to need a record-breaking performance in China to challenge ‘Avatar’ for the record,” Rentrak analyst Paul Dergarabedian said.

The growth of the foreign market, especially in China, and the proliferation of IMAX theaters were the main reasons observers thought “The Force Awakens” could challenge the global record. But their impact was far outstripped by the strong U.S. dollar, which likely took $400 million off the space epic’s global total.

The records “The Force Awakens” decimated in the U.S., and the speed with which it did so, contributed to some of the overheated projections, Dergarabedian said. The movie crushed the opening-weekend record domestically, earning $248 million in three days. And it left the $760 million domestic total of “Avatar” in the dust and is at $882 million and counting.

“The flip side of this is that it underscores what an incredible achievement the numbers put up by ‘Avatar’ were,” said Dergarabedian.

Exhibitor Relations senior analyst Jeff Bock noted that “Avatar” had another big advantage. ” ‘Avatar’ represented a groundbreaking achievement that all but forced people around the globe to go see it,” he said. “The 3D in ‘Avatar’ was something never before seen.”

The numbers bear him out: More than 82 percent of the overseas grosses of “Avatar” came from 3D.

“But if you measure the success of ‘The Force Awakens’ by the grosses from one film in one year, you’re missing the big picture,” said Dergarbedian. “‘The Force Awakens’ reinvigorated America’s most beloved movie franchise and set the stage for this franchise for years to come.”

There are four movies on the slate, and Disney Chairman Robert Iger has hinted strongly that more are on the way.

“In no sense should this incredible run be as an under-performance,” said Dergarabedian. “It’s fun to compare, but the bottom line is both are incredible achievements.”