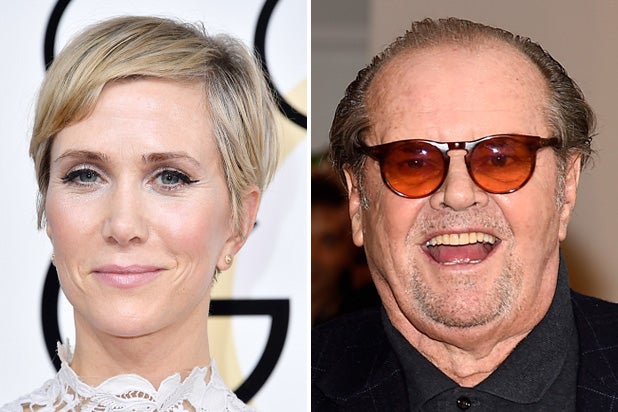 Jack Nicholson and Kristen Wiig are set to star in the English-language remake of the German Foreign Language Oscar contender, “Toni Erdmann,” an individual with knowledge of the project told TheWrap.

Paramount Pictures has acquired the rights to remake the German film, which stars Sandra Hüller and Peter Simonischek as a father-daughter duo.

The film tells the story of a free-spirited man who’s afraid his grown daughter is becoming too driven and corporate, and goes to elaborate lengths to loosen her up. While largely dramatic, Ade’s film contains a substantial amount of humor, including an extended sequence late in the film performed by Hüller completely in the nude.

Adam McKay is set to produce the film alongside Will Ferrell and Jessica Elbaum of Gloria Sanchez Productions. The director and writer of the original “Toni Erdmann,” Maren Ade, will executive produce alongside Jonas Dornbach and Janine Jackowski.

Paramount is still looking for a director and writer.

Nicholson hasn’t been in a feature film since 2010, when he starred in “How Do You Know,” costarring Reese Witherspoon and Paul Rudd. His other most recent credits include “The Departed” and “Something’s Gotta Give.”

Last May, Sony Pictures Classics acquired the North American and Latin American rights to the film. After its first press screening at Cannes Film Fesrival, which was greeted with sustained applause, TheWrap called “Toni Erdmann” “the most delightful surprise of the festival so far,” and added, “Ade has made a generous, hysterically funny but deeply touching father-daughter story that lasts for two hours and 42 minutes but never drags and feels far less than that.”