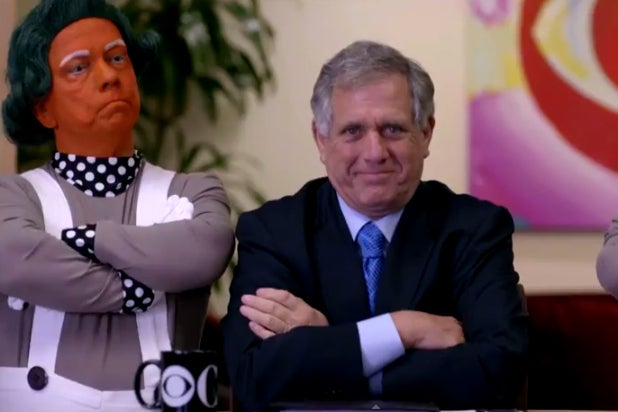 James Corden finds himself in the world of pure imagination that is late-night television thanks to scoring a golden ticket placed in chocolate bars by Les Moonves and his Oompa Loompas.

On Monday’s new “Late Late Show” debut, Corden shared a solid pre-taped sketch that explained how he landed the coveted gig, which was manned by Craig Ferguson for 10 years.

Here’s how it went down: The CBS chief instructed the Willy Wonka characters to place the winning ticket in a “Late Late Show” chocolate bar. Despite their best over-buying efforts, Simon Cowell, Joel McHale, Chris Rock, Lena Dunham, Billy Crystal and others had no luck.

Dunham claimed her loss was proof of misogyny. For another woman, it was just bad luck: Chelsea Handler would have gotten the gig, but she dropped the winning chocolate bar, which was picked up by Corden.

Later, Shia LeBeaouf came in to bore the new host half to death — his biggest challenge yet. At least, that is until Leno started the torture.

After Hollywood’s resident car nut took to waterboarding his new protege, Meryl Streep swooped down from the heavens to save and inspire Corden. The next montage faired far better for the British song-and-dance man.

That said, all of the training perhaps didn’t come from the greatest of intentions. “In three months, this show will be mine,” Leno said at the end, laughing maniacally.