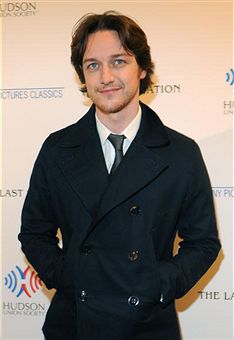 "First Class" will chart the epic beginning of the X-Men saga. Before Xavier and Erik Lensherr (aka Magneto) became archenemies, they were two young men who developed a friendship while discovering their powers for the first time.

With the help of some other Mutants (including old and new faces), they worked together to stop the greatest threat the world has ever known, and in the process, a rift opened between them that started an eternal war between Magneto’s Brotherhood and Professor X’s X-Men.

McAvoy is a consistently reliable actor who has the necessary gravitas (see: "The Last King of Scotland") required to inherit the charismatic role of Professor X, played by Patrick Stewart in the original trilogy. It’s unclear whether McAvoy will shave his head for the role, but I’m sure he would if Vaughn asked him to (unlike "Hitman" star Timothy Olyphant, who has expressed concern about shaving his locks if 20th Century Fox asks him to return for a planned sequel).

Fox is moving quickly on the project in order to begin production this summer in London. "First Class" is currently scheduled for release on June 3, 2011.

McAvoy last appeared onscreen in "The Last Station." He next stars in Robert Redford’s "The Conspirator" and provides the lead male voice in the animated film "Gnomeo and Juliet."