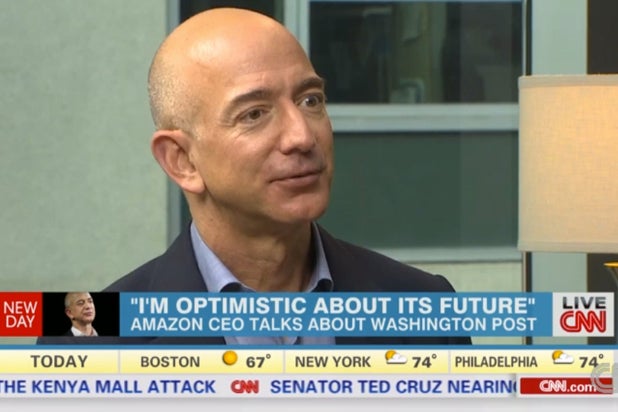 Jeff Bezos, whose $250 million purchase of the Washington Post shocked the media world in August, said he’s happy to give the paper a chance to experiment and will help “from a distance,” but was frustratingly short on specifics during a rare interview with CNN’s Dan Simon on Wednesday.

“I thought the Washington Post is an important institution, and I’m optimistic about its future,” Bezos said.

Simon asked Bezos why he decided to go into the newspaper business at all. Though Bezos nabbed the venerable institution at a bargain basement price, it’s also a publication whose fortunes have declined over the years while its former owners scrambled to adapt to the digital age, making it a risky investment at any price.

Also read: Jeff Bezos Hopes to Foster Innovation at the Washington Post – But Not Sure How

“I’m hopeful that I can help from a distance, in part by providing runway for them to do a series of experiments, and in part through bringing some of the philosophy that we have used at Amazon to the Post.”

To Bezos, that means giving readers what they want, rather than what the newspaper editors might want them to have.

The statements were in line with what Bezos has said about his purchase previously. Earlier in September, he told the Washington Post that he was hoping to foster innovation at the paper but it would take several “experiments” to figure out that best way to do so. And in an August memo to WaPo staff, he stressed that he would lead WaPo from afar and let the paper’s staff figure things out while encouraging invention.