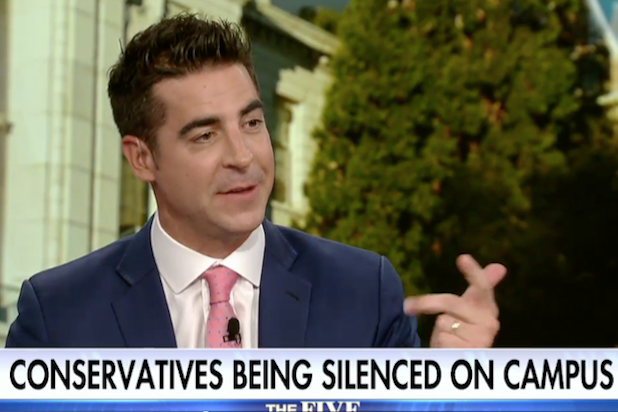 Fox News’ “The Five” co-host Jesse Watters sent media watchdogs into a tizzy when he announced a vacation on Wednesday night after a day of controversy regarding comments he made about Ivanka Trump.

Watters will miss “The Five” for the remainder of the week and Saturday’s edition of “Watters’ World.” It’s not clear if the vacation is simply a well-timed coincidence or if something is happening behind the scenes, but his absence was announced amid backlash over his remark about liking the way the First Daughter speaks into a microphone.

Longtime fans of “The Five” are well aware that members of the panel take time off on a regular basis. Watters regularly filled in for Eric Bolling before being named a permanent member of the panel. Either way, Fox News critics will assume his absence has something to do with the reaction his comment has received on the heels of Bill O’Reilly being fired from the network over sexual harassment allegations.

During Tuesday’s episode of “The Five,” Watters was defending Ivanka, who was jeered in Berlin for claiming her father was a champion for women. Watters argued that those who booed were being hypocritical before asking, “I don’t really get what’s going on here, but I really liked how she was speaking into that microphone.”

“During the break we were commenting on Ivanka’s voice and how it was low and steady and resonates like a smooth jazz radio DJ,” Watters said in a statement provided to TheWrap. “This was in no way a joke about anything else.”

“We all saw your hand to mouth gesture on the video,” attorney Lisa Bloom tweeted Wednesday. “We’re watching how you demean women. We brought O’Reilly down. Maybe you should be next.”

A handful of other media members have also bashed Watters for the comment, with CNN’s Dylan Byers tweeting, “In retrospect, took real chutzpah to commit to a respectful workplace environment and promote Jesse Watters to primetime on the same day.”

When O’Reilly took a vacation amid sexual harassment allegations, he never returned to the network.