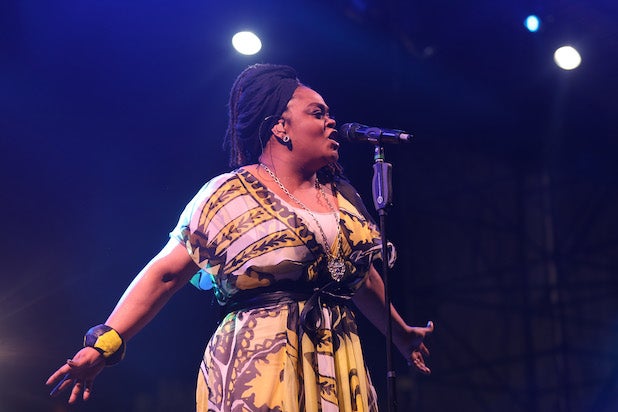 It shouldn’t surprise anyone that Jill Scott, an R&B singer who has collaborated with The Roots and starred in several Tyler Perry films and in “Get on Up” as James Brown’s wife, can get a little nasty, both in her songs and on stage.

Scott got a little freaky with her microphone and performed some NSFW action on it at a previous concert, with the footage of it just surfacing. Watch it below:

Fans lit up Twitter with their reactions and GIFs to Scott’s maneuver, though many of her more dedicated fans noted that if people listened to more than a few of her songs, they’d know that the singer’s provocative actions are normal, with the explicit lyrics in her song “Crown Royal” being a prime example.

Scott also directly responded to the reaction, explaining how this is very much a part of her storytelling as an artist, and that fans will also leave very happy.

The shock that Jill Scott is sexual in her performances from people who owe their existence to her first album is gonna crack me up all day.

Songs by Jill Scott that tells me why this video ain’t surprising:

Her catalogue is legit some slick nasty shit…TOP 5

Here are some reactions to Scott’s microphone handling:

When Jill Scott hit me with the 2 handed pepper grinder pic.twitter.com/YLAKgHxYsT

So wayment….I didn’t know Jill Scott was like THAT pic.twitter.com/esb5pqj6QS

All the Uncles, in their finest 5 button suits, at the Jill Scott show like… pic.twitter.com/D5RIoil82k

me when I found out why Jill Scott was tending: pic.twitter.com/DusyKzGqXk

"Yeah, Jill Scott is gonna be there. Come through."

Jill Scott bout to have the brothas throwin they drawz on the stage!!! ???? pic.twitter.com/5olqFqYJyL

Is Jill Scott doing any meet & greets? Asking for a me.