There have been a number of advancements in dentistry since “Dumb and Dumber” cracked up audiences in 1994, but a new picture posted by Jim Carrey shows that his character, Lloyd Christmas, hasn’t taken advantage of them to fix that signature chipped tooth.

Carrey uploaded the photo, from the upcoming “Dumb and Dumber To,” on WhoSay and wrote, “GESS HUUZ BAK BICHEZ?”

It appears that directors Peter and Bobby Farrelly have delivered on their promise to start shooting the sequel this month, and that Christmas may have actually learned how to use the internet since we last saw him wandering across the desert with best friend Harry Dunne (Jeff Daniels).

The sequel, which Universal agreed to release after Warner Bros.’ New Line passed on the project, takes place 20 years after Harry and Lloyd drove all the way to Aspen to find love and a suitcase full of money, as well as a pair of orange and baby blue tuxedos. This time around, they’ll be searching for one of their long-lost children in hopes of acquiring a new kidney.

Need a reminder of what that goofy grin looks like with the rest of Carrey’s costume on? Here’s a refresher: 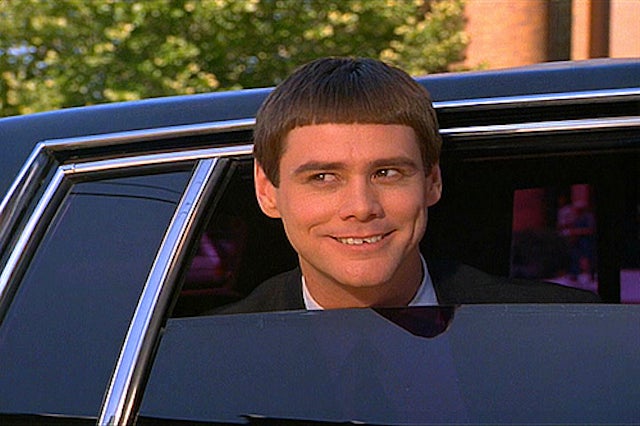